When you rotate a star-shaped figure what do you notice? The shape of a star, when seen from any angle, seems the same.  Have you ever given a thought to the reason behind this? A star is an example of rotational symmetry. The chapter will let you delve into the idea behind this special type of symmetry.

Rotation means circular movement of an object around a fixed axis. A clock is the most common and regularly-sighted example of rotation. The needles of the clock move around a fixed point to tell us time. The movement followed by them is called clockwise rotation.

If any object follows rotation in a direction opposite to clock’s movement then such rotation is termed as anti-clockwise. Other common examples of rotation are blades of ceiling fan and wheels of a bicycle. This where rotational symmetry finds its origin.

Also known as radial symmetry, rotational symmetry is that characteristic in which the object looks same despite rotation of it. When an object rotates around a fixed axis if its appearance of size and shape does not change then the object is supposed to be rotationally symmetrical. The recycling icon is also an example of rotational symmetry. Have you ever noticed something peculiar about the recycle icon? 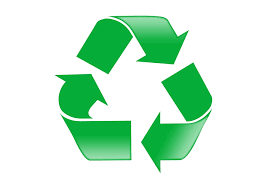 You look at it from any direction, or orientation, the shape is unchanged! This is what rotational symmetry does to the figure. In rotational symmetry, despite the circular movement the shape and size of the object or the figure look the same. In the recycling icon, the arrows of the icon appear to be circularly moving which suggests the rotational concept of recycling. When this icon is rotated to any angle, after every halt it shall look the same.

Now, let’s consider a paper windmill to understand the attributes of rotational symmetry in a better way. A paper windmill is the most joyous toy for every child. Its rotational movement amazes every child, but its unchanged appearance despite continuous rotation adds to the whole amazement. 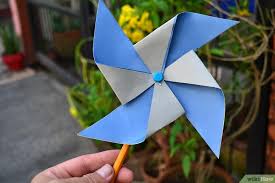 This pin is its center of rotation as its blades rotate around the pin. When we forcefully rotate it to an angle of 90° then we see despite the movement there is no change in its appearance. On further movement, the shape of the paper windmill is the same as the original. The figure below illustrates this more accurately!

The angle at which this paper mill is turned is called the angle of rotation. Here the angle of turn is 90°. A full turn of rotation measures 360°. So for taking one full turn, our paper windmill is moved four times. Do you notice any change after a full turn? The answer shall be a “No”. 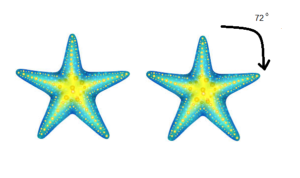 It takes 4 turns to bring the square to its original form. The square, therefore, shows a rotational symmetry of order 4. Things to be noted in object showing radial symmetry

If on every turn, no matter what the angle, the shape of the object looks like its original then the object shows radial symmetry.

Question 1: From the following figures, identify the figures which have rotational symmetry of more than order 1: 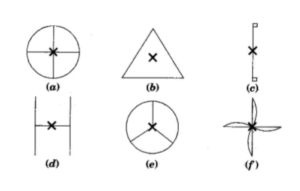 Question 3: What are the various types of symmetry?

Answer: The various types of symmetry are: reflection, glide reflection, rotation, and translation.

Question 4: Can we say that a trapezium has rotational symmetry?

Answer: A trapezium involves one pair of parallel sides. There are some trapeziums that have one line of symmetry. Such trapeziums are known as isosceles trapeziums as they have two equal sides in similarity to isosceles triangles. A trapezium can be said to have rotational symmetry of order one.

Question 5: Can we say that a circle has rotational symmetry?