In view of the coronavirus pandemic, we are making LIVE CLASSES and VIDEO CLASSES completely FREE to prevent interruption in studies
Maths > Symmetry > Lines of Symmetry

Perfection means creating things in flawless harmony. Have you ever wondered how architects make such perfect edifices with flawless constructions? They bring every part of their plan in the lines of symmetry thus giving their map a touch of perfection. In this chapter, we will let you know how symmetrical shapes affects the very basis of geometry.

Symmetry forms the very basis of any geometrical figure. Today, every activity, from paintings to engineering and designing clothes and jewellery uses the idea of giving perfect symmetry in its every artefact. Symmetry brings a harmony in the design of any object, building or painting. The effect of perfect symmetry can also be seen in natural things.

In fact, natural things are the best examples of symmetrical objects. From beehives to leaves and flowers every little thing is a wondrous work of symmetry by nature. We know that a figure is in perfect symmetry if a line of symmetry passing through the center divides the figure into identical halves. The two parts coinciding at this line of symmetry is folded across this line which makes it symmetrical.

If we fold the figure given above exactly at the center, whether vertically or horizontally, both its halves shall be identical to one another. This shows that the figure is symmetrical and its line of the fold is the line of symmetry for the figure. Look at the following figure which shows different lines of symmetry:

The line of symmetry may pass through the center vertically, horizontally and diagonally. The basic idea behind any line of symmetry is to divide a figure into exactly identical halves. Here the orientation of that line does not make any difference on the geometry of that figure.

Lines of Symmetry in Polygons

Polygons are closed figures that are made of three or more than three line segments. Triangle is polygon drawn with least number of line segments. Some other examples of polygons are Square, Rectangle, Pentagon, Hexagon, Septagon etc. Polygons may be regular and irregular. 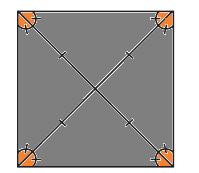 Some More Examples on Symmetrical Shapes

Now, as the number of sides in polygon increases, the maximum number of its line of symmetry also increases. The only condition as mentioned earlier for a polygon to be perfectly symmetrical is that it should have sides and angles making it equal.

From the above discussion, we come to a conclusion that for an object or figure to be in symmetry it is essential that the object or figure is a perfect balance of size, shape, and angles. Any irregularity in shape or angle makes that figure asymmetrical.

Question 1: A figure may have more than one line of symmetry. In the following figures identify the number of lines of symmetry in each figure:

Question 2: What is a symmetrical shape?

Answer: Generally, symmetry is when something is the same on both sides. In addition, an object has symmetry if a central line dividing it (a mirror line) can be drawn on it. Moreover, it shows that both sides of the shape are exactly the same. In simple words, symmetrical shapes refer to those shapes which when cut into half look just like the other half.

Question 4: Where is symmetry used?

Answer: In our daily life, symmetry is something that we see at many places without even noticing it. However, we can easily notice it in various places such as architecture, arts, buildings, and monuments. Moreover, nature uses it to make the appearance of things more beautiful.

Answer: Symmetrical shapes are those when something is the same. While asymmetry is when two things take up the same amount of room but aren’t exactly the same. More often we see the asymmetrical shape in people’s designs because it bores people to look at the same thing again and again.

Share with friends
Previous
Line of Symmetry
Next
Reflection