Have you ever used GPS maps in your car? Or to find your favourite restaurant nearby your location? Do you know the basics of mapping space behind it? Well, let’s find out in the section below.

Table of content
1 Suggested Videos
2 What are Maps?
2.1 Mapping Space Around Us
2.2 Drawing a Map
2.3 Conclusion
3 Solved Examples For You

Maps are used to locate particular places like home, school, river, etc.A map is different from the picture.

Mapping Space Around Us

How do we read maps? What can be concluded and understand while reading a map? What information does a map have and what it does not have? Is it any different from a picture? In this section, we will try to find answers to some of these questions. For example, how far your school is from your home? Now let’s see the distance between your home to school. 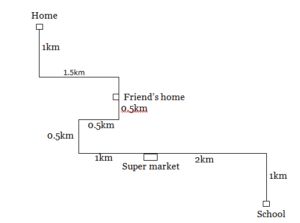 The actual distance is denoted by 1cm for 1km in the map. What can be concluded from the above illustrate? When we draw a picture, we attempt to represent reality as it is shown with all its details, where a map shows only the location of an object, in the relation of other objects.

All above questions can be answered in two ways. The first method is we can user ruler to know distance on the map and multiply number with scale, for example like 5cm, in this case, is equal to 5km. In the second method is we can read marked distance long the tracing path and add them all.

Thus we say that use of certain symbols has helped us to read the map easily. It is observed that the distance shown on the map is proportional to the actual distance. 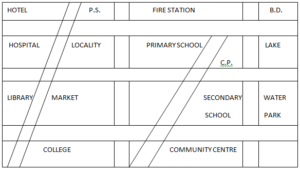 Colour the map as follows: 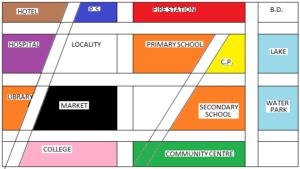 Q2. Draw a street route from the library to bus depot.

Ans: The shortest route from the library to bus depot is – 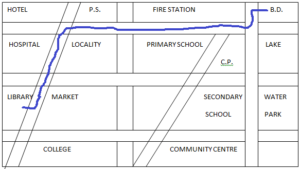 Move from the library towards the north and take a right turn from the locality and go straight passing from the primary school, fire station and City Park. In the front of the lake is our bus depot.

Q3. Which is further east, the city park or the market?

Q4. Which is further south, the primary school or senior secondary school?

A5. Generally, space is considered as an endless three-dimensional magnitude where matters and events have relative position and direction. We often consider physical space in three aligns dimensions, though modern physicists generally consider it, with time, to be part of an endless four-dimensional continuum known as space-time.

Q6. Is anyone in space now?

A6. The Crew of the Soyuz MS-13 spacecraft: NASA astronaut Drew Morgan, European Space Agency astronaut Luca Parmitano and Russian cosmonaut Alexender Skovortsov. All these three astronauts arrived at the ISS on 20th July and will return to earth sometimes in between December or January.

A7. The outer space is not entirely empty – it is a hard vacuum that contains a low density of particles, principally a plasma of hydrogen and helium as well as electromagnetic radiation, neutrinos, dust, cosmic rays, and magnetic fields.

A8. A universe with a low density of matter is older than a matter-dominated one. However, in 2012, WMAP estimates that the age of the universe to be 13.772 billion years, with an uncertainty of 59 million years. Besides, in 2013, Planck measure the age to be 13.82 billion years.