Earth is the third planet from the sun and most dense among all. It is the only planet known to support life on it. We also call it a blue planet. Circumference of the earth is 40,232km, its area is 510 million sq. Km and its distance from the sun about 149 million km. Since Nicolas Copernicus proposed the sun-centered theory in 16th-century earth is regarded as a planet like others of the solar system. We call it the heliocentric theory. The earth is flattened a little at the poles with a slight bulge at the center. There are two types of movement of the earth. One is rotation or daily movement and other is a revolution or annual movement. Here we will discuss the earth rotation speed and its effects. 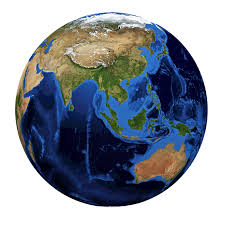 Rotation of the Earth

The earth rotates around an imaginary line that passes through its north and south pole. This imaginary line is its axis of rotation. Earth rotates from west to East. Earth takes about 23hours 56minutes and 40.91seconds to complete one rotation. The rotational velocity at the equator is 1667km/hr. Its speed decreases towards the pole, where it is zero. French physicist Leon Foucault is credited for measuring the speed of earth’s rotation.

Effects of Rotation of the Earth

The spinning of the earth on its axis causes days to turn into nights. A difference of one hour is created between two meridians which are 15 degrees apart. A change in the direction of wind and ocean currents. The rise and fall of tided every day.

1. Effect on the Direction of the Wind

The wind is the movement of air in a particular direction. Its principal cause is pressure difference. In addition, the rotation of the earth also affects the direction of the wind. When the earth rotates on its axis, wind cannot move in a straight line toward north and south from the equator.

4. Change of day and night

Q – What will be the effect of the earth’s rotational speed is increased?

Ans – Days and night will become shorter, as it will take less than 24 hours to complete a full rotation by the earth. Because of faster speed, centrifugal force will increase and gravity will remain constant. Thus, our weight will decrease. There will be temperature change as the earth’s hemisphere will have less time to warm up.