In order to understand the difference between Cyclones and Hurricanes, first, we need to understand these terms and their meaning exactly. These two are different from one another, but still, people always confuse one with the other. Cyclones are mainly atmospheric conditions, which are stormy and possess power for destruction. Due to instability in atmospheric condition cyclones form. On the basis of the region and severity, cyclones can be termed as typhoons or hurricanes. Therefore, hurricanes are a kind of tropical cyclones. Hurricanes can wreak havoc due to their high winds, rains, and floods. The main factor to differentiate between cyclones from the hurricanes is the geographical location in which they occur. Let us explore the difference between cyclones and hurricanes. A tropical system that occurs in the Atlantic and Northeast Pacific ocean is called a hurricane while in the north Indian Ocean they are called a cyclone.

Cyclone term is referring to the spinning storm which rotates around the low-pressure center. This low-pressure center is also popular as the ‘eye’ of the storm. It is well known for being eerily calm compared with the areas under the spinning arms of the storm. Cyclones are considered as the stormy atmospheric systems. These are happening due to the instability in atmospheric conditions. Based on the region and severity of stormy conditions, storms may be termed as typhoons or hurricanes.

What are the Hurricanes?

A hurricane is the category of a huge storm. It is a special cyclone. It can be up to 600 miles across. Also, it has the strong winds spiraling inward and upward at speed up to 200 mph. usually, hurricane lasts for over a week period. They are getting the heat and energy through contact with warm water of the ocean.

Difference Between Cyclones and Hurricanes 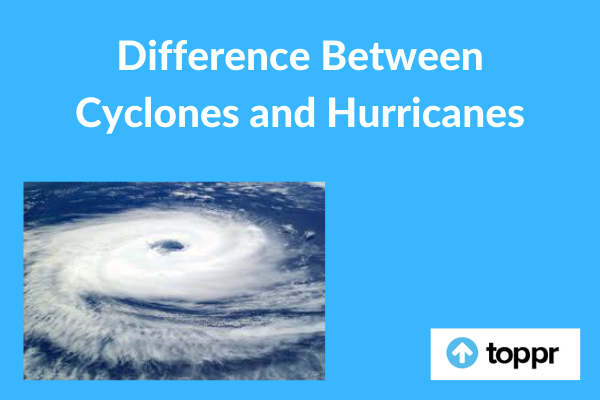 Difference between Cyclones and Hurricanes

The important difference between cyclones and hurricanes

After studying the difference between Cyclones and Hurricanes, let us study some more facts.

FAQs about cyclones and hurricane:

Solution: From the year 1950 to 1952, tropical cyclones of the North Atlantic Ocean were termed by the phonetic alphabet. In the year 1953, the US Weather Bureau switched to women’s names. There were 6 different name lists that were alternating each year. After having significant damage, the name of the hurricane is being retired and then replaced with another.

Q.2: What are the two major geographical elements providing the conditions for the sustainability of the hurricane?

Solution: Heat and moisture two major geographical elements providing the conditions for sustainability of the hurricane.

Q.4: What is a Hurricane Watch?

A: A Hurricane Watch is meant for the possible danger and its development as a hurricane is about 36 to 48 hours away from landfall.

Q.5: What are the common places and origins of tropical cyclones as hurricanes?

A: The three very common origins of tropical storms and hurricanes are the Gulf of Mexico, Western Caribbean, and Near the Cape Verde Islands on the coast of West Africa.