Neutral and earth wires are often confused in the electrical trade. As both conductors are operating with zero voltage. When we connect the ground wire as a neutral wire by mistake, then the devices will operate correctly. But, such connections are against the code, because each conductor has different functions in electrical installations. This article will deal with the difference between earth and neutral. Understanding the difference between earth and neutral may be difficult in the beginning. Many safety and protection related aspects need to be carefully considered while understanding these concepts. Generally, the neutral point is earthed at the distribution transformer. It helps in keeping the earth and neutral in the same potential which protects the equipment against dangerous voltages in neutral.

The neutral wire acts as a return conductor for current flow in the electrical circuit. It completes the AC circuit. It carries the return current back to the source of electricity i.e. transformer. This point is earthed. Ideally, in an AC system, neutral and earth should be at the same potential.

What is the Earth?

An Earth, also termed as ground, is a safety connection to protect the electrical appliances from the electric shock. When a bare conductor inside the equipment touches its metal body, then there is a risk of electric shock to the person who may be using it. This earth conductor provides a low resistance path for the leakage currents to be discharged.

Therefore, it protects the equipment and the person as well. Thus, it is useful for safety concerns against leakage or residual currents in the system. Phase and neutral are connected to the main power wiring, whereas the earth is connected to the body of the equipment. In case of insulation failure, this wire carries some minor current.

Difference Between Earth and Neutral 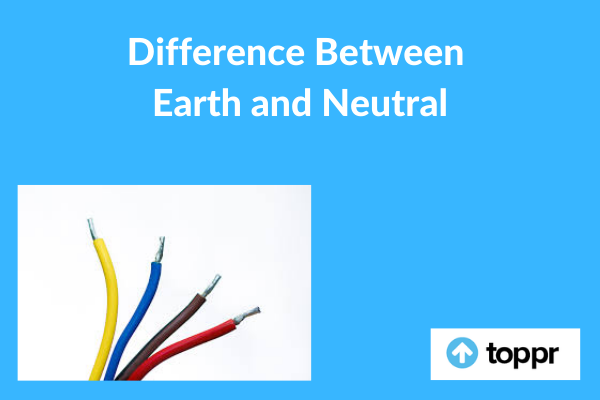 difference between earth and neutral

The important difference between earth and neutral

Role of the neutral wire in electric circuits:

Role of the earth wire in electric circuits:

Earth wire is also having zero voltage similar to the neutral wire, but it accomplishes a very different role. It provides a grounded connection to all appliances and the equipment. Under the normal conditions, all current returns through the neutral wire and hence the grounding conductor will have no current.

FAQs about Earth and Neutral:

Q.1: Is there some voltage difference between neutral and earth wire or not?

Q.2: Why is the main’s neutral wire tied to the earth wire?

Solution: Reasons for grounding the neutral are as follows: