Volts and watts are two of the most common and key terms in the field of Electrical and Electronics Engineering. Most of the time these terms confuse the newbie or those who have just started learning Electrical sciences. Even though these two terms sound alike, they are different from each other. The difference between watts and volts can help us to understand the basics better and know their comparisons thoroughly. Let us now understand what is the difference between watts and volts.

The rate at which electrical work is performed when a current of one ampere flows across the potential difference of one volt is termed as watts.

The measure of potential difference within two terminal of a conducting wire is termed as volts.

Difference Between Watts and Volts 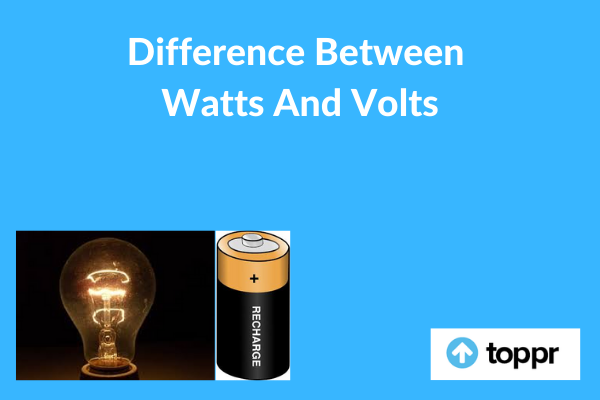 Difference between Watts and Volts

The important difference between watts and volts in detail.

The watt is the SI unit of power. We can define watts as the total energy utilized by the devices in one second. The energy required by the one ampere of current to flow through the potential difference of one volt is termed as one watt. The watt is named after the Scottish inventor James Watt. C. William Siemens proposed this unit initially. According to Watt might be an appropriate name for a unit of power.
The product of the voltage and current is termed as power.

The energy utilized by the electrons moving from one end to another we measure it by volt. Symbolically the capital alphabetical letter V. represents it. The electrical instrument called a voltmeter measures it. The volt has various subunits like microvolt, millivolt, kilovolt, etc.

Volt is also equal to the difference in potential between two points in a conductor carrying one-ampere current when the power dissipated between the points is one watt. The potential difference across a resistance of one ohm when one ampere is flowing through it is termed as equivalent volt.

The volt is known as in honor of the Italian physicist Alessandro Volta. He had determined that the foremost effective pair of dissimilar metals to supply electricity was zinc and silver. We define these units in accordance with Ohm’s law, that resistance equals the ratio of potential to current, and therefore the respective units of ohm, volt, and ampere are used universally for expressing electrical quantities.

FAQs about Watts and Volts:

Q1. What is the relation between watt and volt?

Q2. How many volts make a watt?

Answer: We convert the wattage of 1000 watts into volts for a circuit that has an amperage of 10 amperes. We use the power equation of 1 watt = 1 ampere × 1 volt and translating that formula to find volts, we can end up with 1 volt = 1-watt ÷ 1 ampere and divide 1000 watts by 10 amperes and the resultant voltage would be equal 100 volts.