Thermodynamics is the branch of study to establish the relationship between heat and work. There are various terms and laws which are applicable to the heat and energy. Enthalpy and entropy are the very frequent terms used in thermodynamics. We need to be familiar with the related laws of thermodynamics, in order to understand their relationship. Here we will have the major difference between Enthalpy and Entropy in a systematic way. In simple terms, enthalpy is represented as the total heat content, on the other hand, entropy is the degree of disorder.

Difference between Enthalpy and Entropy 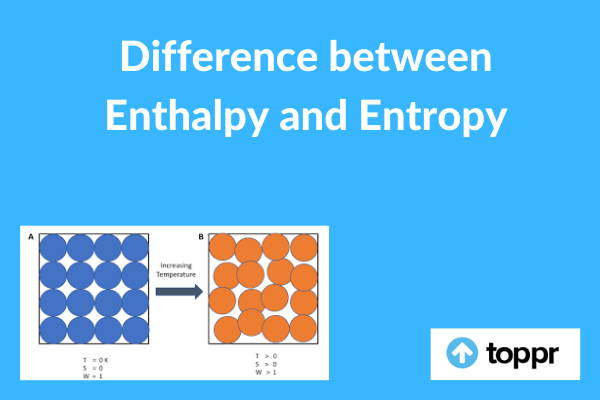 difference between enthalpy and entropy

The important difference between enthalpy and entropy

The Laws of the Thermodynamics:

To get a better understanding of the difference between enthalpy and entropy, let us have the laws of thermodynamics. The popular law of conservation of energy, states that when the heat is added to a system, then it transforms to an equal amount of energy of some other form. It is possible by doing either by increasing the amount of internal energy within the system, or by doing external work by leaving the system, or both of these,

The measurement of the energy in a thermodynamic system is termed as enthalpy. Since the total enthalpy of a system is not possible to measure directly. Therefore, scientists always measure the change in enthalpy of the system.

According to the second law of thermodynamics, no reaction is completely efficient and hence heat is always transferred from warmer objects to colder objects. This law is also termed as the law of disorder, as it describes the concept of entropy. The energy available in the system is inherently active and will act spontaneously to or minimize the thermodynamic forces. Thus more energy present in a system will represent more disorder. When a substance changes its state from a solid to a liquid to gas then molecules will have more freedom to move at each new stage.

FAQs about enthalpy and entropy:

Q.1: Give one sentence for clarifying the difference between enthalpy and entropy.

Solution: Entropy is to measure the randomness of activity in a system, on the other hand, enthalpy is the measurement of the overall amount of energy in the system.

Q.2: Find the true statement the following with explanation.

(c) Both of these are true.

(d) None of these are true

Solution: The first statement is true. Therefore option (a) is correct. Enthalpy will be zero for the elemental compounds like hydrogen gas and oxygen gas. So, enthalpy will be nonzero for water. On the other hand, entropy is always the highest for gases. This is because gas molecules are widely dispersed and hence more disordered. So, hydrogen gas will have higher entropy than liquid water.