Gravitation and gravity are very similar terms used in Physics. Generally, people are considering these two as the same term. Although these two are sounding alike but still there is the difference between gravitation and gravity. Gravitation is the acting force between two bodies. On the other hand, gravity is the force occurring between an object and the very big object earth. Gravitation also represents that this force is directly proportional to the product of the masses of both objects. And, also it is inversely proportional to the square of the distance between them. Usually, gravity is being considered as the natural property of earth, due to which the objects are attracted towards earth. In this article, we will see some facts and the difference between gravitation and gravity.

Every object with some mass exerts the gravitational force on every other object having some mass. This force and its strength depend on the masses of the objects under consideration. Gravity helps to keep the planets to move in their orbit around the sun.

Therefore, we may say that gravity is a force that attracts a body towards the center of the earth. It is a universally accepted fact that gravity plays a major role in sustaining life on earth. This is due to the fact that the gravitational pull between the earth and the sun, the atmosphere is kept on our earth. Hence, it is the reason behind the air that we need to breathe for our survival. Not only this, but it also helps us to be at a safe distance from the sun.

Gravitation is the force of attraction between any two bodies in the universe. In our universe, each object attracts each other with a certain amount of force. But due to the very weak nature of this force, usually, we are not able to even feel it. The large distance of separation is the main reason for its weak nature.

But, gravity’s range is considered as infinite. Its first observation was done by the famous scientist Sir Isaac Newton. He gave his very important Newton’s law of gravitation in the year 1680. Actually, this gravitation exists due to the attraction of objects with the earth.

Difference Between Gravitation and Gravity 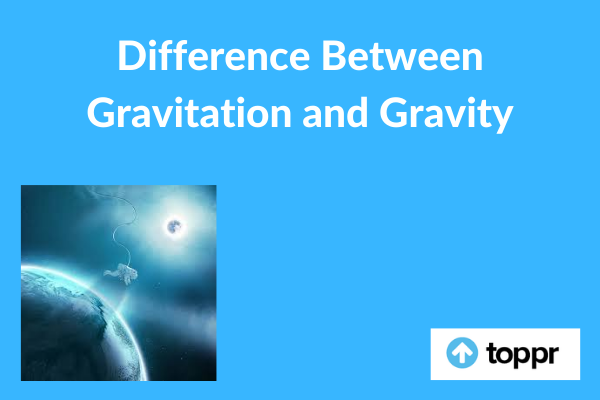 Difference between Gravitation and Gravity

The important difference between gravitation and gravity

FAQs on gravity and gravitation:

Q.2: What is the speed of gravity on the surface of the earth?

Q.3: Why do we feel with less weight on the equator than at the North Pole?

Solution: It is because there is more centrifugal force at the equator to cancel the effect of gravity. Thus, the overall weight at the equator is lesser than at the poles.