As per the thermodynamic terminology, in the adiabatic process, there is no exchange of heat from the system to its surroundings neither during expansion nor during compression. Whereas in the isothermal process, the temperature remains constant throughout the work. This article will definitely help to understand the difference between isothermal and adiabatic process.

In thermodynamics, we study the systems and objects in relation to the measurement of their temperatures, motions, and other physical characteristics. This is applicable to anything from the single-celled organisms to the mechanical systems in the universe. Therefore we can see thermodynamics as the specific branch which deals with the relationships between heat energy and other forms of energy. It also describes the conversion of thermal energy into other forms of energy as well as their effects on the matter. In this regards two very important processes are there- The isothermal process and the Adiabatic Process.

What is Isothermal Process?

It is a thermodynamic process in which the temperature of a system remains constant with respect to time. The transfer of heat into or out of the system is happening at a very slow pace to maintain the thermal equilibrium. At a given constant temperature, the change of the substance, object, or even the system is the Isothermal Process.

If a system is in contact with an outside thermal reservoir, then, to maintain thermal equilibrium, the system tries to adjust itself with the reservoir’s temperature through heat exchange. Thus, for an isothermal process, the change in temperature will always be zero for an ideal system.

What is Adiabatic Process? 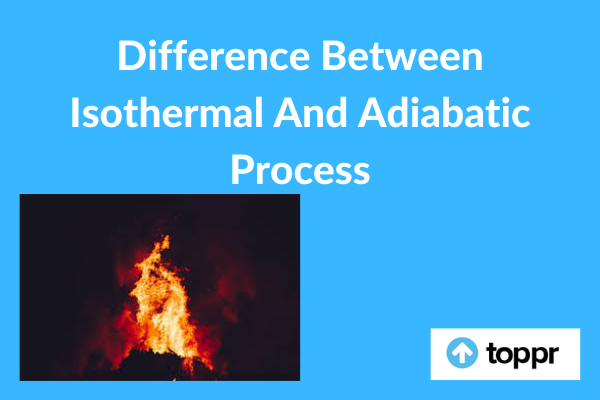 Difference between Isothermal and Adiabatic process

After having the difference between the Isothermal and Adiabatic process. Let us have some examples.

There are many instances, some are as follows:

Examples of the adiabatic process:

There are many instances, some are as follows:

FAQs about the isothermal and adiabatic process:

Q.1: How the heat content of the system will change at constant temperature?

Solution: To change the heat content, it is necessary to have the existence of a temperature gradient. It means the system will remain at constant temperature and still may reject or accept heat if the surrounding is at a different temperature.

Q.2: How the system temperature will change at constant heat content?

Solution: It is possible by the work done on the system and so, the temperature of the system will change even if there is no heat content added or removed from it.  Temperature and heat both are different terms. Heat is the energy in transit, but the temperature is the property of a system like pressure and volume.