The breakdown diode is a two-terminal electrical component which is anode as well as the cathode. The diode allows the current flow in only one direction and blocks in the opposite direction. An electrical breakdown takes place due to two types of occurrences like Zener as well as an avalanche. The main difference between Zener breakdown and Avalanche breakdown is the occurrence of their mechanism due to the high electric field. The difference between Zener breakdown and Avalanche breakdown will help us in understanding the occurrence of their mechanism.

What is a Zener breakdown?

The Zener breakdown occurs when the high electric field is applied across the PN junction diode. This results in the flow of electrons across the PN-junction.

What is Avalanche breakdown?

The Avalanche breakdown happens when a high reverse bias voltage increases the electric field, which further expands up the depletion region. 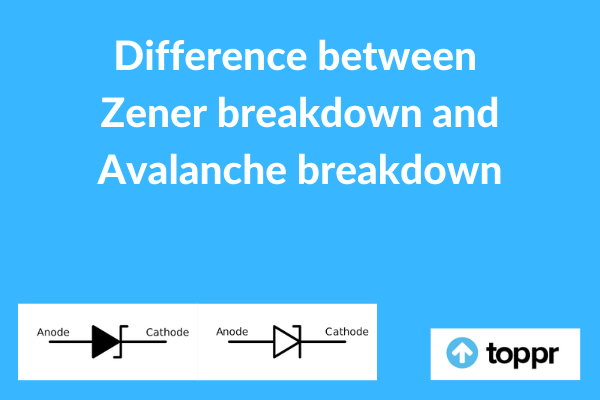 The important difference between Zener breakdown and Avalanche breakdown

After learning about the difference between Zener breakdown and Avalanche breakdown let us discuss them in detail:

Zener breakdown occurs in p-n junction diodes because of their narrow depletion region. When reverse-biased voltage is increased in the diode, the narrow depletion region starts generating a strong electric field. When the applied voltage reaches closer to the Zener voltage, the electric field becomes strong enough to pull electrons from their valence band. The valence electrons break bonding with the parent atom and become free electrons. These free electrons carrying electric current from one place to another.

When an electron becomes a free charge carrier, it also leaves behind a hole in the atom. When the Zener voltage is reached, a huge number of free charge carriers are generated and a large current is able to flow through the diode. In Zener breakdown, the electric field becomes substantially strong, but remains narrow, thus restricting many charge carriers to accelerate. A quantum mechanical effect is generated which is recognized as quantum tunneling.

Avalanche breakdown occurs in a PN junction diode which is reasonably doped and has a thick depletion layer. It usually occurs when a high reverse voltage is applied across the diode. As we keep on increasing the reverse voltage, the electric field also keeps increasing. This electric field exerts a force on the electrons and frees them from a covalent bond. These free electrons moving across the junction and collide with other neighboring atoms. This results in the generation of more free electrons. The drifting of these electrons increases the net current across the junction.

The electric field can be calculated as Ea =Va/d, where Va= reverse voltage and d= width of the depletion layer.

We have already learned that Zener breakdown occurs at the voltage lower than the Avalanche breakdown voltage. The reason behind this is a thin depletion layer width.

Q.1 What is Zener diode?

Answer: The Zener diode is a special kind of diode in which the flow of current can be in the forward direction or reverse direction. The voltage drop at the diode remains stable over an extensive voltages range. Zener diodes are used in electronic devices as they can handle a higher voltage.

Q2. What is the Avalanche diode?

Answer: The diode whose junction is moderately doped and is designed to operate in the reverse biasing condition. Both Zener and Avalanche diode comes under the special category of diodes. They both have the same symbolic representation.