In 1800, as the nature of a professional agreement over the huge response located by Luigi Galvani, Alessandro Volta said the so-called voltaic pile, a forerunner of the unit of voltage, which gave a steady charge and current. Volte had said that the effective pair of similar metals will produce electricity where the basic zinc and silver were added. In late 1861, Latimer Clark and Sir Charles Bright gave the name “volt” for the system of resistance.

In 1873, the British implementation for the betterment of Science had said the volt, ohm, and farad. The national Electrical Congress, now the national technical Commission (IEC), gave a positive indication to the volt as the system for the motive force. They made the unit of voltage unequal to 108 according to the cgs system of voltage, the cgs system during the time was the automatic system of the system and units in science.

Daniell cell, the major source of voltage in the telecom and graph systems of the day. In such time, the volt is defined as the kinetic and potential difference [i.e., what is hereby said the “(voltage difference)” over a conductor when the current in one ampere dissociates one watt of power. The “international volt” is defined as \(\frac{1}{1.434} during the era when emf of a Clark cell was known. Such definition was abandoned in 1908. 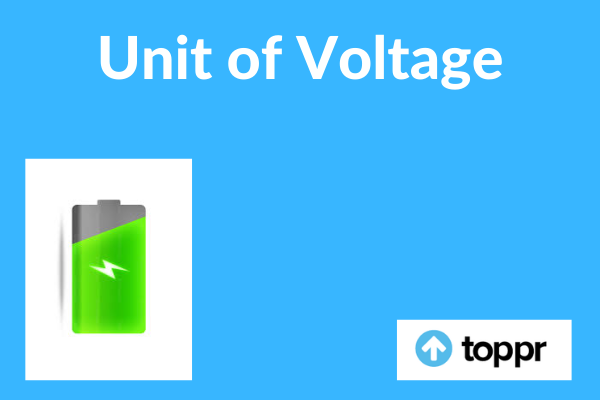 What is the Unit of Voltage?

The basic unit of measurement used for the showing unit of voltage is volt that is represented by the letter v. However, the volt is a given SI unit of magnetic potential or motive force. For this fault, volt cannot further be said in many ways. Volt can also be said as electric potential through a wire for an electric and charged current of unit ampere that dissociates one watt

Volt has to be expressed as the kinetic difference along with two points in a charged circuit that differentiates one joule (J) of energy and coulomb (C) of charge which passes along the circuit. This particular standard is basically seen by a series-attached with the unit of voltage and different of several hundred and tens of thousands of points, excited by microwave performs between 10 and 70 GHz (depending on the different design). Basically, many experiments will be shown to the method that is dependent on the device structure, material, measurement infrastructure, etc., and more correction terms are needed for practical implementation.

Why it is Important to Measure Voltage?

Technicians come to the most troubleshooting condition knowing that a circuit has to customarily perform.

Circuits are for the delivery of energy too much higher—from large device to a house appliance to an industry carrying motor. Loads often have a nameplate that shows their standard electrical reference values, including voltage and charge. Instead of a nameplate, some makers give a complete schematic (technically strong diagram) of a lot of circuitry. Man-made things may include standard values.

These numbers tell a technical value of the unit of voltage what readings to gain from when the load is getting up normally. Reading on a digital meter can object and identify deviations from the normal surface. Even so, the technical person must use tools and experience to specify the factors that cause such variances.

Voltage is the pressurised form of an electrically charged power source that pushes circuit electrons (current) along a conducting loop, enabling them to make work such as glowing light.

FAQs about Unit of Voltage

Q.1. What does the technical value of readings convey?

Ans. These numbers tell a technical value of what readings to gain from when the load is getting up normally. Reading on a digital meter can object and identify deviations from the normal surface. Even so, the technical person must use tools and experience to specify the factors that cause such variances.

Ans. We can express Volt as the kinetic difference along with two points in a charged circuit that differentiates one joule (J) of energy and coulomb (C) of charge which passes along the circuit.