UV light is also known as ultraviolet light is a sort of electromagnetic radiation, which is usually invisible to the human eye. Its wavelength ranges from 10 nm (with a corresponding frequency around 30 PHz) to 400 nm (750 THz). It is shorter than that of light, but longer than X-rays. UV light is present in sunlight and constitutes about 10% of the entire electromagnetic wave output from the Sun. There are many artificial lamps that produce UV light like electric arcs and specialized UV lights, tanning lamps, mercury-vapour lamps, and black lights. The long-wavelength UV lights aren’t considered as harmful radiation because their photons lack the energy to ionize atoms, it can cause chemical reactions and causes many substances to glow or fluoresce. 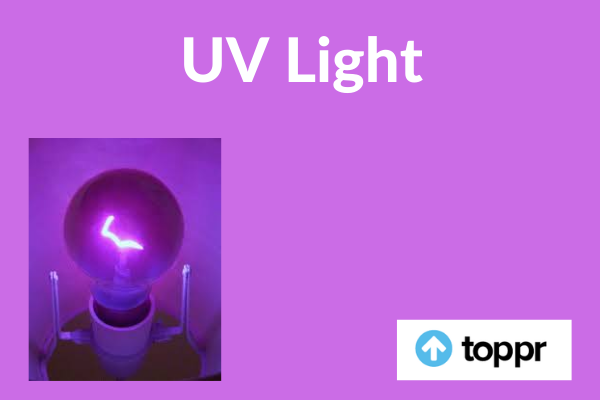 Apart from simple heating effects, UV lights have a greater biological and chemical impact on humans. There are lots of practical applications of UV radiation that derive from their interactions with organic molecules. Short-wave UV light rays although damages DNA but also sterilizes the surfaces with which it comes into contact. UV light in humans causes suntan and sunburn which are very common effects whenever exposed to ultraviolet. It also increases the risk of carcinoma. The quantity of UV light produced by the Sun is enormous. It literally means the world wouldn’t be ready to sustain life on land if most of that light weren’t filtered out by the atmosphere.

The discovery of UV light and its radiation took place in 180. German physicist Johann Wilhelm Ritter performed an experiment and observed that invisible rays just beyond the violet end of the colour spectrum. These invisible rays darkened silver chloride-soaked paper more quickly than violet light itself. He called them “(de-)oxidizing rays” to stress chemical reactivity and to differentiate them from “heat rays”.

During the 19th century name of these invisible rays were changed to the term “chemical rays” and was adopted soon afterwards, and remained popular during that era. Later these terms “chemical rays” and “heat rays” were eventually changed in favour of ultraviolet and infrared, respectively. Short-wavelength UV lights have a sterilizing effect by killing bacteria and was discovered in the year 1878. By 1903, the foremost effective wavelengths were known to be around 250 nm. In 1960, the effect of ultraviolet on DNA was established.

Ultraviolet rays are invisible to most humans. Human eye lens blocks most radiation ranging within the wavelength of 300–400 nm; shorter wavelengths are blocked by the cornea. Humans don’t have colour receptor adaptations for ultraviolet rays. The photoreceptors present in our retina are sensitive to near-UV light, and other people lacking a lens (a condition referred to as aphakia) perceive near-UV as whitish-blue or whitish-violet. Under some specific conditions, young adults and children can see ultraviolet light around the wavelengths of 310 nm. Short wavelength UV light is visible to insects, some mammals, and birds. Small birds have a fourth colour receptor for ultraviolet rays; this provides birds “true” UV vision.

The UV light spectrum is broadly ranging in between 10–400 nanometers, are often subdivided into a variety of ranges as recommended by the ISO standard ISO-21348. They are;

8) Extreme ultraviolet or EUV with a wavelength between 10–121 nm.

9) Vacuum ultraviolet or VUV with a wavelength between 10–200 nm.

Ultraviolet is often detected by suitable photodiodes and photocathodes, which may be tailored to be sensitive to different parts of the UV spectrum. Sensitive UV photomultipliers are available. UV radiation is measured with the help of instruments like Spectrometers and radiometers. Silicon detectors are used across the spectrum.

The Sun emits ultraviolet in the least wavelengths, including the acute ultraviolet where it crosses into X-rays at 10 nm. Stars which are extremely hot (more than the sun) emits proportionally more UV radiation than the Sun. Sunlight in space near the position of Earth’s highest atmosphere consists of about 50% infrared, 40% light, and 10% ultraviolet, for a complete intensity of about 1400 W/m2 in a vacuum.

Earth’s atmosphere is so life is supportive that it blocks about 77% of the Sun’s harmful UV, when the Sun is highest within the sky (at zenith), and absorbs most of the shorter UV wavelengths. Of the ultraviolet that reaches the surface, quite 95% is that the longer wavelengths of UVA, with the tiny remainder UVB. Almost no UVC reaches the Earth’s surface. The fraction of UVB which remains in UV radiation after passing through the atmosphere is heavily hooked into cloudiness and atmospheric conditions.

Effects of UV light on the human body

2) Harmful effects – In humans, excessive exposure to UV radiation can result in acute and chronic harmful effects on the eye’s dioptric system and retina. Skin, the circadian system, and the immune system is also affected. Overexposure to UVB radiation not only can cause sunburn but also some sorts of carcinoma.

Answer – Yes UV lights work to some extent in UV air purifiers. It uses short-wave ultraviolet light (UV-C light) to inactivate airborne pathogens and microorganisms like mold, bacteria and viruses. But according to EPA, UV-C air purifier does not seem effective as a stand-alone unit because it cannot trap or remove particles.

Q.2. Can you use a UV light on food to kill microbes?

Answer – UV light is used in many food industry applications as it is completely safe, low maintenance and does not require the use of any chemicals or pesticides. UV lamps can effectively eliminate many microbes and kill viruses like E. Coli and Salmonella.