Have you ever thought of how humans are capable of seeing colours? The explanation is, colours are only electromagnetic radiations with an alternate wavelength of light. In the electromagnetic range, the visible region is called visible light. These colours have various wavelengths as well. 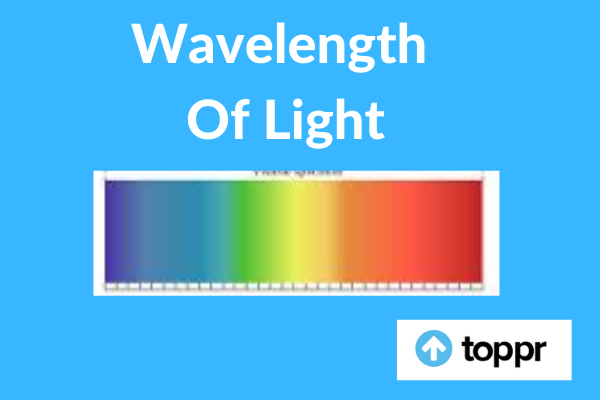 What is the Wavelength?

Expecting a sinusoidal wave moving at a fixed wave speed, the wavelength is inversely proportional to the frequency of the wave. Basically, the waves with higher frequencies have a shorter wavelength, and lower frequencies have a longer wavelength. Wavelength relies upon the medium (for instance, vacuum, air, or water) that a wave goes through. For example, waves are sound waves, light, water waves, and occasional electrical signals in a conveyor.

The range of frequencies of the wave is shown in a spectrum. The name is originated with the obviously visible light range. However, can be applied to the whole electromagnetic spectrum.

The light comprises of various wavelengths and every wavelength relates to various colours. The colour we see is a consequence of a wavelength being reflected from the item we are seeing. The visible spectrum is the range of light that is noticeable and discernable to the unaided eye. This range goes from red at 700 nm to violet at 400 nm.

Visible light waves are electromagnetic waves we can truly distinguish or see with no outer help. These lights are seen as the shades of the rainbow, that is violet, indigo, blue, green, yellow, orange and red. This additionally incorporates the shading white, which is comprised of the multitude of seven tones referenced previously. White light is a polychromatic light. Light from the sun is polychromatic light, which implies it contains all the seven colours. Lasers structure monochromatic lights, which mean it delivers a single colour. Various objects around us assimilate and mirror various wavelengths of light. Consequently, they show up in various colours.

Wavelengths of the Visible Spectrum

The wavelength of the visible spectrum of light is as follows:

Lights in a Spectrum

White light: White light’s wavelength is from 400 to 750 nm. When the white light is passed through the prism, the light spectrum is formed due refraction of different wavelengths at different angles.

Ultraviolet Light: Ultraviolet light is from the end of the visible region and the X-ray region in the electromagnetic spectrum. It is closest to the violet portion of the visible light. It ranges from 10 nm to 400 nm.

Infrared Light: Infrared radiation has a longer wavelength in comparison with visible light. Infrared light extends from 750 nm to 1 mm.

Yellow Light: Yellow light has a wavelength between 590 nm and 570 nm. This yellow light is emitted by low-pressure of sodium lamps.

Green Light: The wavelength extends from 570 nm to 500 nm. It can be easily seen in grass and leaves. Grass reflects green wavelength and absorbs all other wavelengths and thus grass appears green.

Blue Light: Blue light ranges from 500 nm to 450 nm. The atmosphere scatters shorter wavelengths and thus the wavelength corresponding to the blue colour is scattered by the atmosphere. That’s the reason why the sky appears blue when we look up at it.

Indigo Light and Violet Light: It is a wavelength between 450 and 425 nm. Indigo is between the primary colour blue. Violet has a wavelength of 425 nm to 400 nm is the visible light with the shortest wavelength. This light has a shorter wavelength and is hence it scatters effectively by the atmosphere. Since our eyes are sensitive to blue colour, the sky appears blue rather than indigo or violet colour to us.

FAQs on the Wavelength of Light

Q.1. What is Wavelength?

Answer: The wavelength of light is the distance between the two successive crests or troughs of the light wave.

Q.2. What is Visible Spectrum?

Share with friends
Previous
Varactor Diode
Next
Work and Energy