Definition of an atomic Spectra is; the spectrum of electromagnetic radiation produced or absorbed by an electron during transitions between different levels of energy within an atom. As the electron is excited from one energy level to another, it either emits or absorbs light from a particular wavelength. Collection of all these wavelengths of the atom in a given range of conditions, such as pressure, temperature, etc., is the atomic spectra of atoms. There are three kinds of atomic spectra, namely, emission spectra, absorption spectra and continuous spectra. 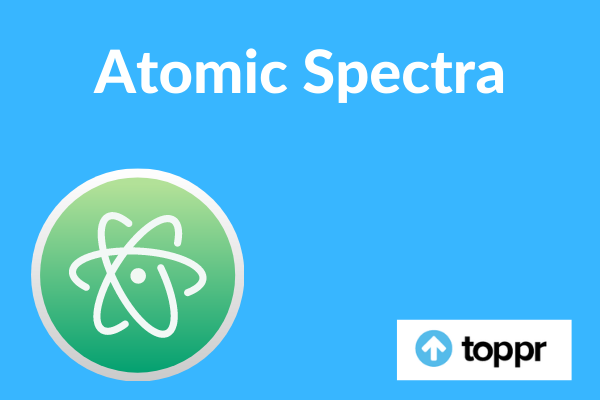 There are various characteristics of atomic spectra, such as:

In atomic physics, Rydberg’s equation calculates the wavelength of the spectral line in a wide range of chemical elements. The equation is a generalisation of the Balmer series for all atomic hydrogen transitions. It is a unit of energy, explained in terms of the ground-state energy of the electron in the Bohr model of the hydrogen atom. In cgs, where “me” is electron mass, “e” is the charge of the electron, h-bar, “Z” is the atomic number, and “n” is the principal quantum number of the electron state. It is easy to measure the spectral lines using the Rydberg formula.

λ is the wavelength of light

Z is the atomic number

n is the upper energy level

n’ is the lower energy level

Single-electron atoms such as hydrogen have spectral series of Z = 1.

Atomic emission spectroscopy: It requires the transition of energy from the ground to the excited state. Also, atomic emissions can explain this electronic transformation.

Atomic fluorescence spectroscopy: it is a combination of atomic emission and atomic absorption as it includes both excitation and de-excitation radiation.

Q.1. Explain how the atomic emission spectra occur and how they relate to the elements on the periodic table.

Q.2. How do the lines on the atomic spectrum relate to the transition of electrons between energy levels?

Q.3. Why should atomic spectra be a pure line spectrum?

Answer. When atoms are excited, they emit light from specific wavelengths corresponding to different colours. And the emitted light is observed as a series of coloured lines with dark spaces in between. A series of coloured lines is known as a line or atomic spectra. Each element generates a unique set of spectral lines. Since no two elements generate the same spectral lines, the specific elements line spectrum can differentiate them. It may have either absorption or emission line spectrum based on whether the atom is light or another colliding electron.