Minkowski space or Minkowski spacetime is mainly named after the mathematician Hermann Minkowski. It is actually a mathematical formulation in which Einstein’s theory of relativity is formulated. It is a four-dimensional manifold which represents space-time and the four dimension are three dimensions of space with a single dimension of space. 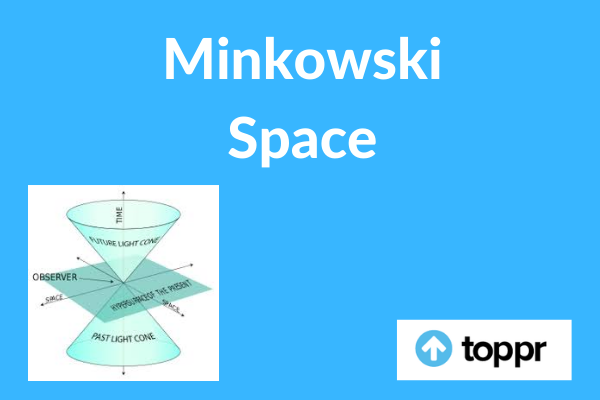 The structure of the Minkowski space is a four-dimensional vector space that is equipped with a non-degenerate and the signature is (-,+,+,+). In Minkowski space, the elements are called events or four-vectors.

In the theory of relativity, we mainly use the Minkowski space. In the case of Minkowski space, the set of all null vectors at an event continues the light cone of that event. All the notions are independent of the frame of reference. Minkowski space generally denotes relativity of simultaneity since this hyperplane depends on v. In the plane spanned by v and such a win the hyperplane, the relation of w to v is hyperbolic-orthogonal. Once a direction of time is chosen then time-like and null vectors can be further decomposed into various types.

Q.1 In everyday life how many dimensions do we live in?

Answer: In everyday life, we live in a space of three dimensions which are height, width, and depth.

Q.2: What are the dimensions that a human can see?

Answer: Humans are 3D creatures but we can only see two dimensions.

Q.3: Can a human eye see one dimension?

Answer: A human eye can visualize two dimensions but cannot see one or zero dimension without the help of two-dimension objects which represents them.