An electronic component having two terminals and allowing current to flow only in one direction is a diode. Of the 2 terminals, one terminal is connected to a semiconductor device material and therefore the other terminal to a semiconductor device. Counting on the body, the sort of semiconductor materials useful in the development of a diode, many various diode variants are possible. A Varactor Diode (Varicap Diode or Tuning Diode) may be a contact diode which acts as a variable capacitor under varying reverse bias voltage across its terminals. 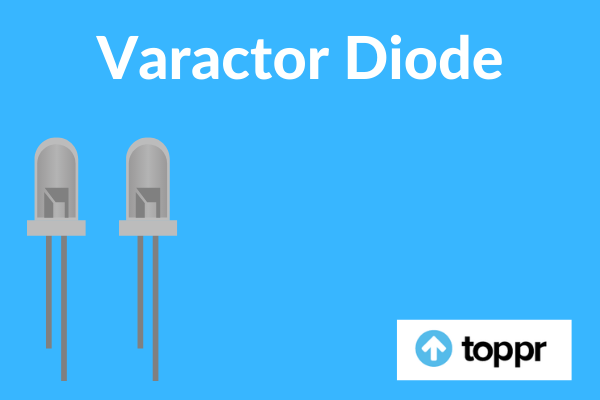 Table of content
1 What is a Varactor Diode?
1.1 Operation
1.2 Construction
1.3 Characteristics
1.4 Use during a circuit
1.5 Applications
2 FAQs about Varactor Diode

What is a Varactor Diode?

Varactor diode is a diode which will behave as a variable capacitor. It’s capacitance at the p-n semiconductor junction changes with the change in voltage applied across its terminals. It’s mainly in use to replace variable capacitors that require to be operated mechanically for changing the worth of capacitance. One advantage is that the capacitance of a varactor diode is often changed just by changing the voltage across its terminals.

All diodes exhibit this variable junction capacitance. But varactor diode is manufactured to take advantage of the effect and increase the capacitance variation.

A Varactor Diode consists of p-type and semiconductor device layers sandwiched together, with the n-type layer attached to a mesa (table-shaped) structure. A gold plated molybdenum stud is connected to an n-type layer via the mesa structure and it acts as the cathode terminal.

The p-type layer is again attached to a different gold plated molybdenum stud (which acts as the anode) via a gold wire. apart from some portion of the molybdenum studs, the whole arrangement is enclosed during a ceramic layer.

The p-type and n-type layers of the varactor diode are made from silicon or gallium arsenide counting on the sort of application that it’s used. For low-frequency applications, silicon is employed, and for high-frequency applications, gallium arsenide is employed. Just in case of varactor diodes, the concentration of impurities near the pn junction is extremely less and it gradually increases as we move towards the layer’s other surface.

Varactor diodes mostly operate under reverse bias conditions and thus, there’s no conduction. They’re voltage controlled capacitors. We sometimes refer them to as varicap diodes, although the word varactor is widely in use.

Use during a circuit

Tuning circuits: Generally, the utilization of a varicap diode during a circuit requires connecting it to a tuned circuit, usually in parallel with any existing capacitance or inductance. A DC voltage is applied as reverse bias across the varicap to change its capacitance. The DC bias voltage is taken into account so that it does not enter the tuned circuit. This is achieved by placing a DC blocking capacitor with a capacitance about 100 times greater than the utmost capacitance of the varicap diode serial with it and by applying DC from a high impedance source to the node between the varicap cathode and therefore the blocking capacitor.

Another circuit combination we see is two back-to-back (anode to anode) varicap diodes. When designing tuning circuits with varicap it’s usually good practice to take care of the AC component of voltage across the varicap at a minimal level, usually but 100 mV peak to peak, to stop changing the diode capacitance by an excessive amount, which might distort the signal and add harmonics.

Q.1. What is abrupt varactor diode?

Answer. Abrupt varactor diode exhibits the inverse square of the C-V function and the doping concentration is constant.

Q.2. How can we increase or decrease the capacitance of a varactor diode?