The fine structure constant, is denoted by the sign α (the Greek letter alpha). It is a type of fundamental physical constant which quantifies the strength of the interaction between elementary charged particles. The fine-structure constant is a dimensionless quantity associated with the elementary charge ‘e’. It’s formula is \(4\Pi \varepsilon _{0}\tilde{h}c\alpha = e^{2}\). It is also also referred to as Sommerfeld’s constant. 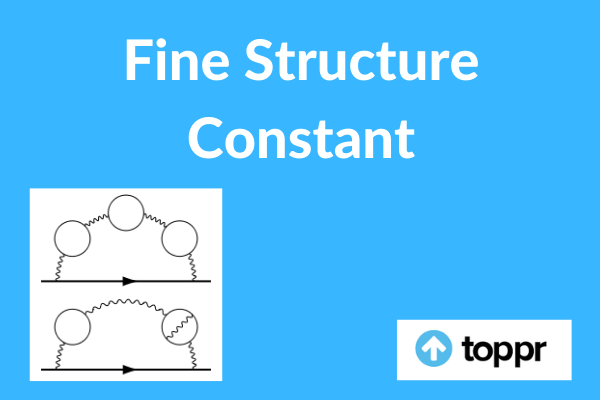 What is Fine Structure Constant?

The spectrum line constant, \(\alpha\), are often thought of being the ratio between the energy needed to beat the electrostatic repulsion driving these electrons apart and therefore the energy of one photon whose wavelength is \(2\pi\) multiplied by the separation between those electrons.

Based on the precise measurement of the atom spectrum by Michelson and Morley in 1887, Arnold Sommerfeld extended the Bohr model to incorporate elliptical orbits and relativistic dependence of mass on velocity. Arnold first stated this term fine-structure constant in 1916. The primary physical interpretation of the fine-structure constant α was because the ratio of the speed of the electron within the first circular orbit of the relativistic Bohr atom to the speed of photon within the vacuum.

This features a relative standard uncertainty of 0.15 parts per billion.

There is a general agreement about the value of α, as measured by various different methods. The well-liked methods in 2019 are measurements of electron anomalous magnetic moments and of photon recoil in atom interferometry. Further refinement of this work were published by the top of 2020, giving the worth:

This value comes with a relative accuracy of 81 parts per trillion.

In QED or quantum electrodynamics, as we learn more thorough quantum theory underlying the electromagnetic coupling, we get to know that the renormalization group dictates how the strength of the interaction grows logarithmically with the relevant increase in energy scale.

As the energy scale increases, the strength of the interaction within the Standard Model approaches that of the opposite two fundamental interactions, a feature important for grand unification theories. If QED were a particular theory, the fine-structure constant would actually diverge at an energy referred to as the Landau pole—this fact undermines the consistency of QED beyond perturbative expansions.

The anthropic principle is a controversial topic regarding why the fine-structure constant has the value it does. It tells about the stable matter. Therefore life and intelligent beings, could not exist if its value were much different. For instance, if α were to change by 4%, stellar fusion won’t produce carbon, which will result in non existence of any carbon-based life. If α were greater than 0.1, stellar fusion is going to be impossible. Thus, no place in the universe will be warm enough for life as we know it.

Q.1. is that the spectrum line constant changing?