Planck equation describes the spectral density of electromagnetic waves emitted by a black body in equilibrium at a given temperature ‘T’ when there’s no net flow of matter or energy between the body and its environment. Planck’s equation shows us the relation between spectral emissivity, temperature, and energy. These are the fundamentals of IR imaging. 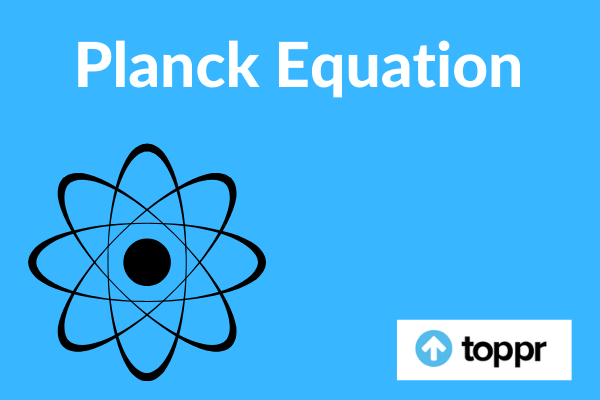 What is the Planck Equation?

Planck’s equation describes the quantity of spectral radiance at a particular wavelength radiated by a black body in equilibrium. The equation is E=hv. This equation says that the energy of a particle of light (E), known as a photon, is proportional to its frequency ( v), by a continuing factor (h), \(h = 6.625 \times 10^{-34} Js\). This suggests that photons with low frequencies, like radio waves, have lower energies than photons with high frequencies, like x-rays.

The relationship given by Planck’s radiation law, given below, shows that for increasing temperature, the entire radiated energy increases and therefore the peak of the emitted spectrum shifts to shorter wavelengths. Consistent with this, the spectral radiance of a body for frequency ν at temperature T is:

What is Planck Constant?

A black-body is an object which absorbs and emits all kinds of radiation frequencies. Near thermodynamic equilibrium, Planck’s law closely describes the emitted radiation. Since it is dependent on temperature, so Planck radiation is claimed to be thermal radiation. Such as the more the temperature of a body the more radiation it emits at every wavelength.

Planck radiation features a maximum intensity at a wavelength that depends on the temperature of the body. Planck radiation is the highest amount of radiation that anybody can emit at equilibrium from its surface, whatever its chemical composition or surface structure.

Answer: N refers to the nth state of vibration. f is the frequency of the lowest energy state, h is a constant called the Planck constant, and En is known as the energy of the nth level of vibration.