This article explains What Are Electromagnets in detail. The electromagnets are temporary magnets that are created when the electricity passes through a metal wire coil. When electricity passes through the metal coil, the electric field creates the magnetic field at the core or centre of the coil. This magnetic field can be made more powerful by introducing an iron rod in the centre of the coil. Since iron metal has the intrinsic property to retain the magnetic field the insertion of the iron rod at the centre make it a powerful magnet but it is a temporary magnet.

When the current is turned off, the iron rod with powerful magnetic core becomes a simple iron rod without magnetic property. These magnets are different from permanent magnets as permanent magnets do not require electricity to create the magnetic field. The change in the strength of the magnetic field created by the electric current passing through the coil is by changing the amount of electric current. 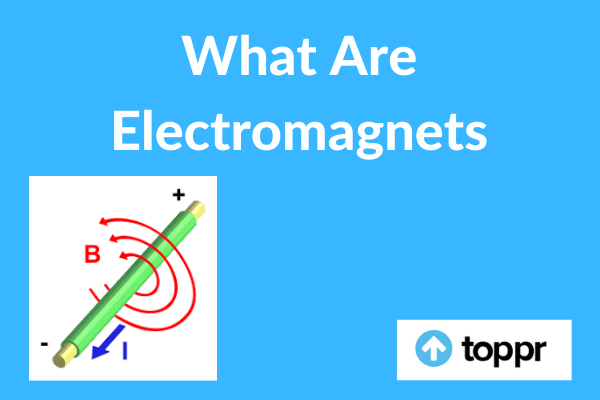 Making and uses of Electromagnets

Now while increasing the amount of current, the magnetic field grows rapidly and reaches to maximum strength. After reaching the maximum strength, an increase in the electric field does not result in increased magnetism. By stopping the current, the magnetic field becomes zero and the atoms which aligned earlier return to its natural random state.

Advantage of the electromagnets is that they are not permanent magnets and they can be made stronger by giving more amount of electricity. Also, the poles of these magnets can change by changing the direction of the current. By using this property of electromagnets, magnetic separators are made, industrially. This magnetic separator is used to separate iron scrap from a heap of scrap. Usage of electromagnets is popular where controllable magnetic flux is required in such a way that it can be varied, reversed or switched on and off.

Advantages and Disadvantages of Electromagnets

Electromagnets are very useful where the changing of poles and discontinuation of the magnetic field is necessary. A magnetic separator utilises this property of electromagnets very well. When magnetized by passing current, it attracts the iron scraps from the heap of scraps and its operator moves the scrap to another place and stops the current supply to drop them. By deploying magnetic separator, we get iron scrap.

Other advantages of electromagnets are that they are inexpensive and easy to build. They are lightweight and do not damage the test-piece which is a part of the electromagnet.

FAQs on What Are Electromagnets

Q.1: What are electromagnets?

Q.2: What type of current is in use to make electromagnets?

Answer: In a DC circuit, current flows in one direction so creating a strong magnet like a permanent magnet DC should be used. In the AC circuit, electric current oscillates 50 or more times in a second depending on the frequency of the current and changing the direction of the current. This alteration causes too much heat generation which can damage the circuit. In long run, the use of AC can damage the electromagnet.

Q.3: What are the types of electromagnets?

Answer: There are three types of electromagnets, resistant, superconductors and hybrids.

Share with friends
Previous
Trade Winds
Next
Conservation of Momentum