Luminosity refers to the overall energy emitted by various celestial bodies (stars, galaxies) per unit time. It is basically estimated in joules per second or in watts in SI units. Luminosity is the absolute measurement of the radiated electromagnetic power (light) of the radiant power generated by the light-emitting source. The luminosity values are given either in terms of the luminosity of sun or the magnitude, which is called the absolute bolometric magnitude of the object, which is the measurement of the total energy emission rate. A bolometer can measure radiant energy by the process of absorption and measurement of heat. 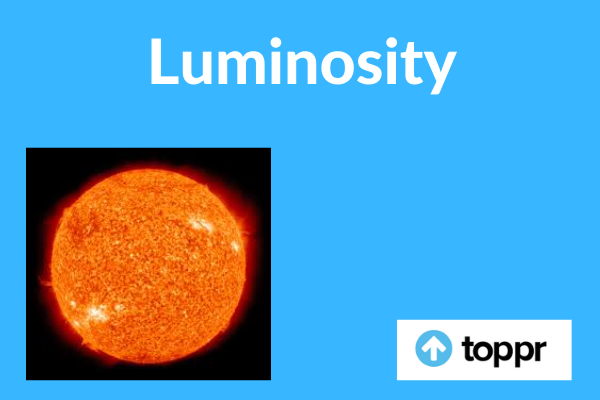 The size of the star:

The larger the star is, the more energy it emits, and the more luminous it is.

The temperature of the star:

The brightness of a star

The brightness of a star that appears to our naked eyes depends primarily on two factors:

The apparent brightness of the source is the result of geometry. As light rays originate from the body, they disperse out into the field. According to the Inverse Square Law of brightness, the perceived brightness (B) of the source is inversely proportional to the square of the distance of source (d).

The mathematical equation is:

Luminosity depends on the surface area of a star. If the radius of the star is R,

The surface of the star = 4PR2

Two stars with the same temperature, one with radius 2R, will have four times more luminosity than a star with radius R.

The luminosity of a star varies depending on its temperature. When, a star is assumed to be a full black body, the radiation generated per second will be in accordance with the law of Stefan-Boltzmann.

s – Stefan’s constant with a value

A – Surface Area of the star

T – Temperature of the star

Calculation of the energy emission from a star which is the same size as the sun.

A star with double the temperature of the sun will have 16 times higher the energy output.

A luminosity of a star measures on the basis of two stellar characteristics; size and temperature. The first is usually expressed in terms of solar radii, R. while the latter is in kelvins, but in most situations neither can be measured directly. Two other metrics are required to calculate the radius of a star,

In a few cases, both of these measurements can be with great precision, with cool supergiants also possessing large angular diameters and a few cool evolved stars have masers in their atmosphere which can determine the parallax using Very-long-baseline interferometry (VLBI). However, the precise calculation of angular diameter or parallax of most stars, or both, is beyond the ability of a man. Since the active temperature is simply a number representing the temperature of a black body that reproduces the luminosity, it is certainly not possible to calculate it explicitly but the spectrum can help in measuring it.

Classification of Luminosity groups is divided based on Roman numerals from I to V.

I (a) Bright Supergiants

Q1. How to convert luminosity to Watts?

Answer. We know that the luminosity of the sun is

Q2. Which is the brightest star in the universe, and what is its colour?

Answer. The brightest star in the sky is Sirius, and it is bluish-white in colour.

Share with friends
Previous
Inelastic Collision
Next
Motion in Physics