We all have played with the magnets. But, have you ever wondered about its origin? The story of the discovery of the magnetic substances is interesting but more interesting is the scientific study of the cause of this force. Each magnet produces a force which is unique. Let us study the magnet and its properties.

Table of content
1 Suggested Videos
2 The Story of Magnet
2.1 Browse more Topics under Magnetism And Matter
3 Natural Magnets
4 Artificial Magnets
4.1 Video on Magnetic Effects of Current and Magnetism
5 Properties of Magnets
6 Solved Examples For You

The Story of Magnet

There is an island called Magnesia in Greece. Years ago, shepherds here complained that their wooden shoes with nails stayed stuck to the grounds. They were unable to walk further. This was the story behind the discovery of magnetism. So, how did this relate to the presence of magnetic fields? Actually, this island had lots of magnetic ore deposits!

Sounds really interesting! Doesn’t it? Let us now look at this topic in greater detail and discuss magnets and their properties. The property of an object by virtue of which it can attract a piece of iron or steel is called magnetism. The object itself is called a magnet. Now, we will look at the types of magnets.

A natural magnet is an ore of iron that attracts small pieces of iron, cobalt, and nickel towards it. It is usually an oxide of iron named Fe3O4. Magnetite or lodestone is a natural magnet.

A magnet that is prepared artificially form the artificial magnets. Examples include an electromagnet, a magnetic needle, horseshoe and bar magnets etc. According to the molecular theory, every molecule of a magnetic substance, irrespective of whether or not it is magnetized.

The poles are the two points near but within the ends of the magnetic materials, at which the entire magnetism can be assumed to be concentrated. The poles always occur in pairs and they are of equal strength. Like poles repel each other and unlike poles attract each other. This is all the basic information about magnets. Now, we will look deeper into the properties of magnets. 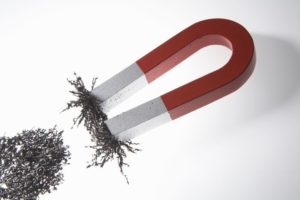 Video on Magnetic Effects of Current and Magnetism

Q: If a bar magnet is cut lengthwise into 3 parts, the total number of poles will be:

Sol: D) Magnetic monopoles can’t exist. Therefore, no matter how low you go to (atomic or subatomic level), you will always find a magnetic dipole. Magnets have to have at least one North and one South Pole. So when the bar magnet is cut into 3  parts, every part will have its own poles and thus the total number of poles will be 6.