We use light-emitting diodes, or LEDs, commonly as a standard source of light in electrical equipment. Further, it has got a broad range of applications which vary from the mobile phone we use every day to big advertising billboards. Moreover, they find uses in devices to show what the time is. Similarly, we also use it to display different kinds of data. Through this article, we will look at what LEDs are and the uses as well as types of it. Thus, it will help us in getting a better understanding of light emitting diode. 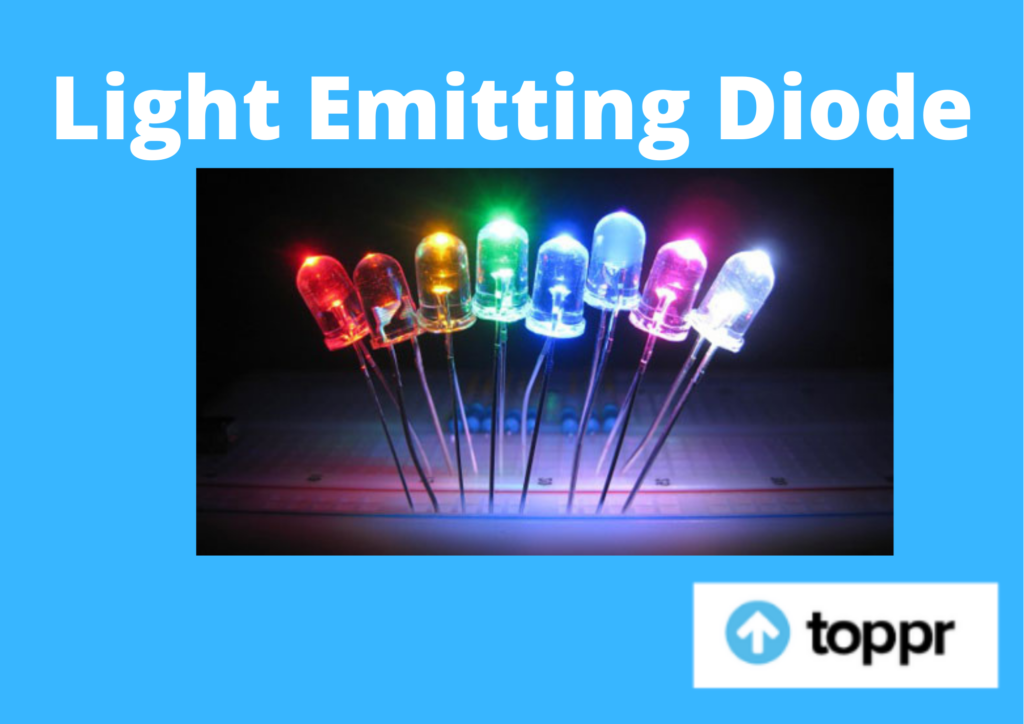 A light releasing diode is an electric component which emits light when the electric current flows through it. Further, it is a light source which is on the basis of semiconductors.

When current passes through the LED, the electrons recombine with holes and emit light in this procedure. It is a particular kind of diode which has the same type of characteristics as the p-n junction diode.

This means that an LED enables the flow of current in its forward direction whereas it blocks the flow in the reverse direction. Further, we build light-emitting diodes through the use of a weak layer of heavily doped semiconductor material.

On the basis of the semiconductor material which we use plus the amount of doping, an LED will emit a coloured light at a specific spectral wavelength when forward biased.

Now, we will take a look at what a LED symbol is and its demonstration was given above. If you look closely, the symbol resembles the p-n junction diode. Basically, what makes them different from each other is that the two arrows denote that the diode is emitting the light.

The LEDs also have a particular drop in voltage forward in cases where we use typical circuits such as a conventional diode. The drop in voltage is dependent on the current of the LED, the colour of the produced light and more.

There are different values in the drop of voltage which would range from 1.5V to 2.5 V current for 10 to 50 mA current.

Thus, when we talk about the holes, the free electrons are going to be at the higher energy bands. When this movement of free electron and hole occurs, there is a change in the energy level as the voltage drops from the conduction band to the valance band.

We refer to this whole process as electroluminescence. Similarly, we refer to the diodes as a light-emitting diode. In LED, energy which discharges in light creates hinges on the forbidden energy gap.

We use LEDs in a lot of fields which includes optical communication, alarm and security systems. Further, we also use them in remote-controlled operations, robotics, and more.

Mainly, we use it in so many areas because of the long-lasting capability of it as well as the low power requirement, fast switching capacity and rapid response time. Now, we will take a look at some of the few standard uses of the light-emitting diode:

The backlight of a TV is the major power-consuming source. When we use LEDs, it offers an efficient power reduction. Similarly, when we use an LED at the TV’s edges, it is going to be a cost reduction choice.

Using LEDs directly behind the display offers much better contrast. This is why CFLs and LCDs have been replaced by LEDs in TV backlighting.

LEDs help in thinning the backlight design of our smartphones and also makes it within a low cost. While the price of LED can vary as per the sizes of the display of the smartphone, the lower output voltage ensures a longer battery life.

LED display boards are common now these days and are used outdoors like storage signs, billboards, road signs, etc. In signboards which has multiple languages conveying signals, the use of more LEDs will be beneficial in terms of less power consumption.

The automotive industry has been increasingly using LEDs. They help to save energy and make visibility clearer. Further, they come in use greatly in the back and rear of an automobile and gives better accessibility.

Moreover, it can also enhance the pedestrian’s and driver’s safety because enhanced visibility helps with it.

We also use LEDs for dimming of lights and reduce energy consumption. We can also use this dimming feature in appliances which need global dimming and local dimming.

This dimming feature is also used in Appliances where it is of two types.

There are various kinds of LEDs which we design through the use of semiconductors. They include:

Question 1: Which fields use LEDs?

Answer 1: We use LEDs in a lot of fields which includes optical communication, alarm and security systems. Further, we also use them in remote-controlled operations, robotics, and more.

Question 2: Why do we use LEDs in smartphones?

Answer 2: LEDs help in thinning the backlight design of our smartphones and also makes it within a low cost. While the price of LED can vary as per the sizes of the display of the smartphone, the lower output voltage ensures a longer battery life.