To understand the term Escape Velocity let us carry out a small activity. 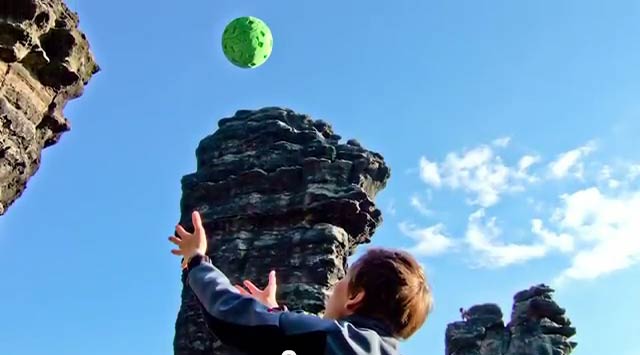 Suppose you are having a ball in your hand. You throw a ball in the air and you see that it comes down. We know that it comes back because of the force of gravitation. Now you throw the ball with greater velocity, in this case, the balls reach a greater height but eventually, it comes down and falls on the surface of the ground.

Because it still experiences the force of attraction by the surface of the earth. Now suppose you throw the ball with such a high velocity that it never comes back on the ground. This is where escape velocity comes into the picture. Escape velocity is the velocity that a body must attain to escape a gravitational field.

So if you throw the ball with the velocity which is at least equal to the escape velocity, in that case, the ball will go out of the gravitational field.

Suppose the ball is initially in your hand. So that is the initial position of the ball. Now throw the ball at a greater velocity, that it never comes back. As we don’t know where did the ball go, so its final velocity is ∞. So with this assumption let us derive the expression.

Now by the law of conservation of energy, the total energy at the initial position should be equal to the final position.

L.H.S has to be alawys +ve, which implies

Assume the ball is thrown from earth’s surface.

This is the velocity in which the objects never comes back. In terms of ‘ g ‘

Q1. The escape velocity of a particle depends on its mass m as:

Ans: C. Escape velocity, ve= √2gR. It is independent of the mass of the particle. Thus, it will depend on m0

Q2. The earth retains its atmosphere. This is due to:

Ans: B. The earth retains its atmosphere. This is due to the escape velocity is been greater than the mean speed of the atmospheric molecules.