Fire is one of the most natural phenomena we use in our everyday lives to perform different activities. For example; cooking, lighting and various other activities. All this is due to the controlled production of fire. The fire is a blessing to us can become dangerous within seconds if it is not in a controlled manner. The most common examples of this are the forest fires which cause damage to most of the forest, animals living there and our natural resources. Another good example of fire damages is the fire that breaks out in houses, causing a lot of damage. In those situations, we usually call the fire department to monitor the fires. Fire authorities use fire extinguisher to extinguish the fire, depending on the intensity and magnitude.

According to the principle of the fire triangle, for the production of fire, we need three elements to be present, they are fuel (something that can burn), a source of heat (which can combust the fuel), and air (for a constant supply of oxygen). 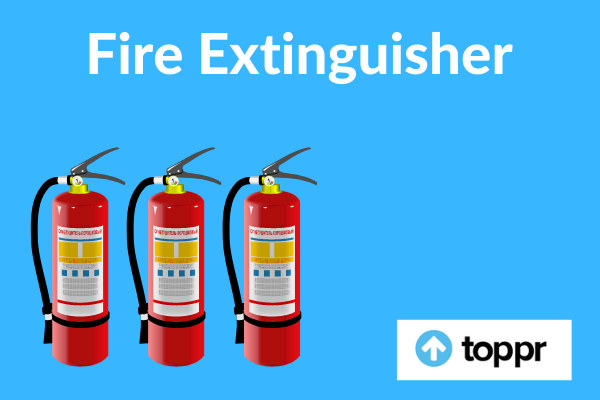 What is a Fire Extinguisher?

A fire extinguisher is an external fire safety system useful to extinguish or control minor fires, often in emergency cases. It is not for use in an out-of-control fire, such as where the fire has reached the ceilings, endangering the customer (i.e., no escape route, smoke, explosion hazard, etc.) or otherwise requires the skills of a fire brigade. Usually, a fire extinguisher consists of a hand-held cylindrical pressure vessel carrying an agent which discharges to extinguish the fire. Fire extinguishers produced with non-cylindrical pressure vessels do exist but are less common.

Types and Classes of Fire Extinguishers

The various kinds of fires caused by the various types of fuels categorize into different classes fires.

There are six different types of fire classes

Class A Fire Class A fires involve fires caused by fuel materials, including paper, cloth, wood and other flammable solids.

Class B Fire: Class B fires involve fires triggered by flammable liquids, such as paint, turpentine and petrol, among several others.

Foam Extinguishers are the most common form of fire extinguishers useful for class B fires. However, they are water-based, which means that they are also useful in extinguishing class A fires.

Generic dry powder extinguishers are also known as ABC extinguishers. These can be useful for class A, class B and class C fires. They are not for use in confined spaces as the dry powder in the extinguisher can be inhaled. Often, it’s not easy to clean up the residue after the fire. They can also be useful for fires involving electrical appliances.

Along with fires caused by various organic materials, like woods, textiles and paper, and flammable liquids, including petrol and paint, any fire involving electrical equipment up to 1000 V can extinguish with the aid of this fire extinguisher.

Wet chemical extinguishers are for use in Class F fires, like cooking oils and fats. They are also useful in Class A fires, but it is more common to use a foam or water extinguisher for this fire hazard.

Carbon Dioxide (CO2) Extinguishers are primarily in use for electrical fire hazards and are typically the primary type of fire extinguisher in data server rooms. They put out Class B fires, too. CO2 extinguishers suffocate fires by displacing the oxygen that the fire needs to burn.

As the fire brigade begins to spray water over the areas where the fire occurred, the water cools off the fire temperature. The ignition temperature of the fuel decreases due to the continuous water spraying. So fuel can no longer burn, so it stops the fire from spreading. In addition, water vapours block the oxygen supply on the fuel surface, thus reducing the supply of oxygen to the fuel surface.

Q.1. In which places do we find fire extinguishers?

Answer. A fire triangle is a principle that explains the elements necessary for a fire to start, they are;

Q.3. What are the different colours that help identify fire extinguishers?

Answer. The colour of the fire extinguishers classify based on the agents they contain, such as;