A magnetic field refers to a vector field in the neighbourhood of a magnet, electric current or charging electric field. In here, the magnetic forces are observable. The moving electric charges and intrinsic magnetic moments of elementary particles connected with a basic quantum property which we call the spin produces this field. Further, magnetic field and electric field are both interconnected to each other. In other words, they are components of the electromagnetic force, one of the four fundamental forces of nature. Through this article, we will take a look at the definition, history, illustration, properties, origin and more. This will help you get a better understanding of this topic. 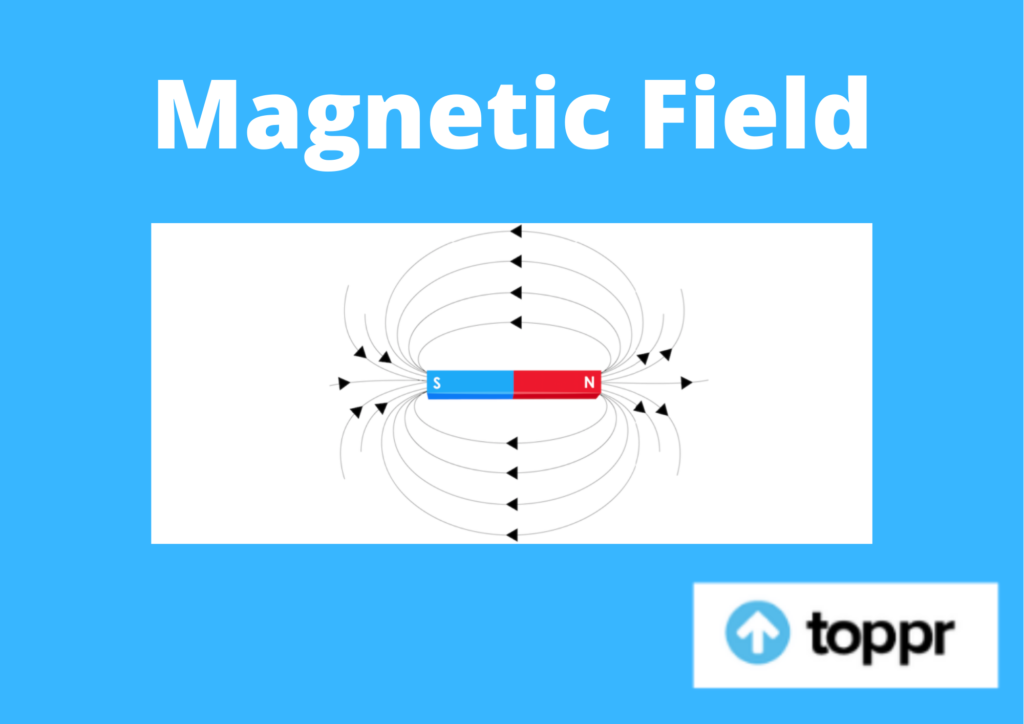 The region around a magnetic material or a moving electric charge within which the force of magnetism acts is known as the magnetic field.

The symbol for it is B or H. Further, the unit is Telsa and the base unit is (Newton. Second)/Coulomb.

In 1269, the research on the magnetic field started when Petrus Peregrinus de Maricourt, a French scholar, mapped out this field on a spherical magnet’s surface through the use of iron needles.

He observed that the resulting field lines were crossing at two points. Thus, he called these points ‘poles’. After that, he declared that magnets always have a North and South pole regardless of how finely one slices them.

Around three centuries later, a statement was made by William Gilbert saying that the earth is a magnet. In 1750, an English clergyman and philosopher, John Mitchell, said that magnetic poles attract and repel each other.

Then, Charles-Augustin de Coulomb in 1785, confirmed the magnetic field of the earth through experiments. Following this, a French mathematician and geometer, Simeon Denis Poisson, generated the first model of this field in 1824.

As the 19th Century arrived, the previously-held notions were refined and challenged. Hans Christian Orsted discovered in 1819 that an electric current produces a magnetic field around it.

After that, André-Marie Ampère proposed a model of magnetism in 1825, stating that this force was because of perpetually flowing loops of current, instead of the dipoles of magnetic charge.

After that, Faraday showed how a changing magnetic field produces an electric field, in 1831. in fact, he discovered electromagnetic induction. Further, James Clerk Maxwell published theories on electricity and magnetism between 1861 and 1865, which were known as Maxwell’s equation.

The vector field is a set of many vectors that are drawn on a grid. Over here, each vector points in the direction that a compass would point and has a length that depends on the strength of the magnetic force.

Magnetic field lines do not cross each other. They always make closed-loops. Further, they always emerge or begin from the north pole and terminate at the south pole. Finally, the density of the field lines denotes the strength of the field.

Origin of a Magnetic Field

As per Ampere, whenever an electrical charge is in motion, a magnetic field is created. To understand it better, take a wire for example, and when you connect it to a battery, the current starts flowing.

Thus, we call this Ampere’s Law. As per this law, the magnetic field at a distance r from a long current-carrying conductor I is specified by the equation-B=μ0I2πr

Over here, μ0 is a special constant which we call the permeability of free space. μ0=4π×10−7T⋅m/A. Further, materials having higher permeability have the ability for concentrating on magnetic fields.

The Motion of Electrons around the Nuclei of Atoms

Permanent magnets work on the basis of the motion of electrons around the nuclei. Upon observation, it is learned that we can make only certain materials into magnets. For obtaining this state, there are certain conditions required.

The first one is that if a material wants to be magnetic, there must be atoms that have one or more unpaired electrons with the same spin. Iron has four such electrons and thus is good for making magnets out of.

Secondly, the material must be stable enough at room temperature for allowing the establishment of an overall preferred orientation. If we establish it permanently, then there can be a permanent magnet which we also refer to as ferromagnet.

Lastly, certain materials become sufficiently well ordered to be magnetic when they are in the presence of an external magnetic field. The external field lines all the electron spins up, but the alignment vanishes once we remove the external field. We call these types of materials paramagnetic.

Question 2: Does space have magnetic fields?

Answer 2: Yes, it does. The spiral arms of the Milky Way are popular for having quite a large-scale organized magnetic field on the basis of studies of large numbers of pulsars and the polarization of their radio signals. Moreover, interstellar dust clouds also have magnetic fields. As these clouds collapse, the fields are amplified.