The Cyclotron was invented by Ernest O. Lawrence in 1929–1930 at the University of California, Berkeley and got the patent in 1932. He got the Nobel Prize for his invention in 1939. 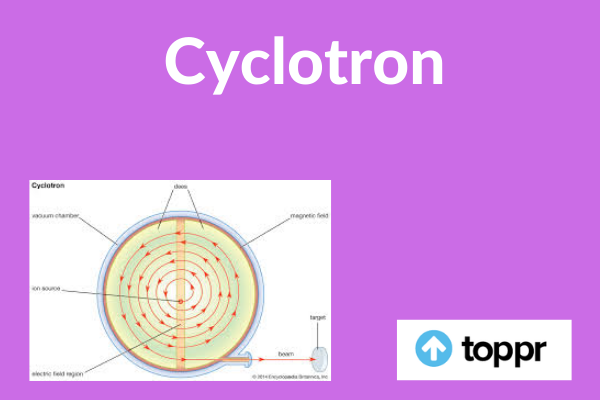 There are two types of cyclotrons, namely, synchrocyclotrons and isochronous cyclotrons.

It is an alternative to the synchrocyclotron. As stated above that in synchrocyclotrons, the output beams come with a short gap. To avoid this short gap and get a continuous delivery of beam/particles, use of isochronous cyclotrons is necessary. In this structure, the magnetic poles are designed in such a way that the field’s frequency is constant for all particles. This way, all the particles get the acceleration in the isochronous time intervals. The main disadvantage of this cyclotron is the size of magnets which are large and costly. Though the output is continuous but getting the high magnetic field values at the outer edge is a bit difficult.

When electrons are removed from the atoms, they become positively charged particles and when these charged particles come across the strong magnetic field, in the form of a “D” shape or spiral form, they accelerate and attain a very high speed. This high speed of charged particles can, then, be utilised in several areas like medical treatment, nuclear physics labs, etc.

In the medical area, high-speed protons produced by cyclotron are used in the treatment of cancer. In nuclear physics labs, these high-speed charged particles are the main sources for nuclear disintegration.

The cyclotron consists of two “D” shaped hollow metal plates. These plates are placed in such a manner that their straight sides facing to each other leaving a small gap between them. All these arrangements are inside a vacuum chamber. These two “D”s are then sandwiched between two magnetic plates which create north and south poles. The charged particle is introduced at the centre of Ds. According to the Lorentz principle, the magnetic field directs the motion of the particle in the circular path. The particle’s circular motion becomes spiral motion.

In each circular turn with the increase in speed makes the circular motion a spiral motion. When the particle reaches the exit point of the chamber, it hits the target at a very high speed gives the desired result.

Theory of Motion of the Particle in Cyclotron

A cyclotron consists of two “D” shaped hollow plates which are sandwiched between two magnetic plates. When a charged particle is introduced at the centre of hollow space between these two “D”s, the charged particle goes to one of the Ds with negative potential and starts to accelerate.

As the magnetic field B is perpendicular to the charged particle’s motion, according to the Lorentz’ rule, this motion becomes circular. After completing the half-circle, when this particle goes inside the other “D” with negative potential, it moves in the circular motion due to the magnetic field. In this way, a complete circular motion occurs with a radius r. Therefore, the centripetal force required to keep this particle in the circular path is

Where v is the velocity and m is the mass of the particle.

Where q is the charge on the particle. As these two forces create the circular motion of the particle, at the rim of the “D” or at the exit point of “D” where r = R, these forces will be equal. So at r = R, equating these forces, it gives

And the kinetic energy E produced by the particle is

Now, replacing the value of v in the above equation from equation (1), we get

After simplification, we get

This shows that higher the radius of “D” and a strong magnetic field with a lightweight charged particle can produce a high impact on the target.

Q.1: What is the definition of a particle accelerator?

Q.2: Mention the types of cyclotron?

Answer: There are two types of cyclotrons, namely, Synchrocyclotron and Isochronous cyclotrons.

Q.3: How and where the cyclotrons are useful?

Answer: Cyclotrons, the producers of high speed and energy charged particles are in use in the medical field and nuclear physics labs. In the medical field, they are used in particle therapy for treating and curing cancer. Another use of these devices is in proton therapy. In this therapy, an ion beam is used to kill the tumours by penetrating the body and minimising the damage to healthy tissues along the path. On the other hand, in nuclear physics, these devices are useful to calculate various properties of materials like finding the mean spacing between the atoms, creating various collision products, etc.