Rare earth magnets are mainly permanent magnets. They are consist of a composition of alloy which is mostly made from rare earth elements and lanthanide series elements. The magnetic field produced by the rare earth magnets is much stronger than the ferrite magnets and alnico magnets. 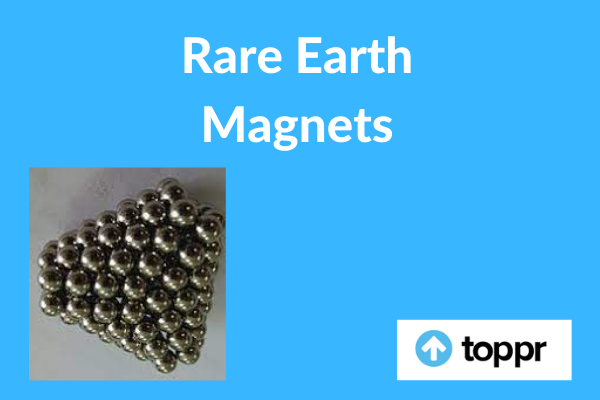 Sintered samarium cobalt magnets show fragile behaviour and are very much vulnerable to chipping and cracking. They might crumble when the thermal shock is given. The main disadvantage of this magnet is they have very low mechanical strength. These magnets are stable at very high temperatures and have high coercive force.

ii) Neodymium magnets: They are the strongest type of magnets and the cost is affordable. These magnets are made from an alloy of iron, neodymium, and boron. They are also known as abbreviation NIB. They possess higher coercivity. Neodymium magnets have a very high resistance to demagnetization. The mechanical strength of the magnet is low and they are not stable at very high temperatures. Their corrosion resistance is also very low.

Q.1 What are the main disadvantages of Samarium- Cobalt magnets?

Answer: Samarium-Cobalt magnets have very low mechanical strength and they are very much costly.

Q.2: What is the most common coating is used in rare earth magnets?

Answer: The most common magnets which are used to coat rare earth magnets is epoxy resin.