Are you aware that the earth is also a magnet? Did that surprise you? How do you think then that the suspended bar magnet always points in the north-south direction? This is the concept of the Earth’s Magnetism that we are going to discuss in this chapter. It is really interesting to study and analyze this concept of earth’s magnetism.

The reason, why a bar magnet points in the north-south direction, is because of the influence of earth’s gigantic magnetic field. It is believed that the electric currents circulating from earth’s core to space give rise to the earth’s magnetic field.

There is no concrete reason for the cause of the earth’s magnetism. However, there are a few theories that revolve around it. Some of the theories are  mentioned below: 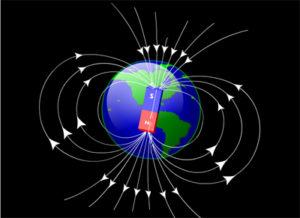 When a magnetic needle is suspended freely in the air, it always points in the north-south direction free form all other attracting forces. This is known as Magnetic Meridian.

The Angle of Dip or Magnetic Inclination

Take a magnetic needle and suspend it freely so that it can rotate about a horizontal axis as shown in the diagram below:

The angle of dip or magnetic inclination

The angle that the north pole of the needle makes with the horizontal axis is known as the Angle of Dip or Magnetic Inclination.

The Formula for Earth’s Magnetic Field

There are times when these elements undergo regular or irregular changes at all places on earth. Why does this happen? Following are some of the important variations of the elements.

Q: Why the earth has a magnetic field?

Answer: There are various theories suggesting the reason behind earth’s magnetic field. However, the two most considered theories are: