Nowadays, many oral and topical treatments are available to improve acne. Doctors are prescribing gels, creams, and ointments, which contain chemicals like salicylic acid, benzoyl peroxide, and others. Researchers have estimated that acne affects about 85% of teenagers, but it can persist into adulthood too. Also, women are more likely to experience an acne problem than men.

Salicylic acid and benzoyl peroxide are the two common ingredients that are available over-the-counter as well as with the prescription. Benzoyl peroxide (BPO) is an organic compound that belongs to the peroxide family. It is being formed by two benzoyl groups and those are connected by a peroxide link. Benzoyl peroxide is one of the most important organic peroxides according to its applications. It is a popular oxidizer, and it is mainly used in the production of polymers. Also, it is useful as bleach as well as the water disinfectant. 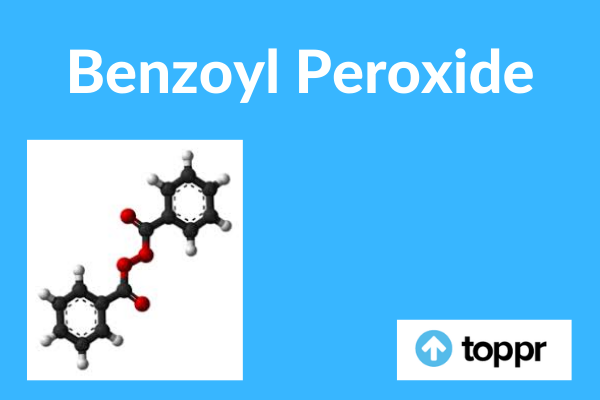 It is a type of topical antibacterial agent which has been a mainstay for the treatment of acne. One most important advantage of it over other antibacterial agents is that bacterial resistance does not develop due to it. Also, with its antibacterial effect, it may also have anti-inflammatory actions. This property is due to blocking the ROS production in neutrophils in some dose-dependent manner. Benzoyl Peroxide can be used alone or in combination with other agents, but in both ways, it has remained an important treatment option.

One popular study measured the bacterial counts from the individuals having its treatment. Also, 6% of benzoyl peroxide gel is more effective for suppressing acne when compared to 1% clindamycin gel. Other studies have also shown that, when combined with topical clindamycin, its treatment always resulted in decreased P. acnes counts and hence improvement in the number of lesions. Additionally, with the concomitant use of BPO and clindamycin, the number of clindamycin-resistant bacteria was not increased.

Dibenzoyl peroxide and Benzoperoxide are some synonyms for Benzoyl Peroxide. Its molecular formula is \(C_{14}H_{10}O_{4}\).  Its Molecular Weight is 242.23 g/mol. Benzoyl peroxide appears as a white, odourless powder.

Often an initiator such as benzoyl peroxide is added to the monomer to do the process of polymerization. In photo-polymerization, this initiator is being activated by the light. Further, it forms the material like a free radical or an ion radical. Then, it starts a chain reaction of polymerization. It is the radical reaction centre propagating by successive addition of large numbers of monomer molecules.

The chain reactions are being controlled and inhibited to achieve a good shelf-life and hence it builds an amplification step into the process. Photo-crosslinking also gives the amplification. This is due to the large areas can be cross-linked with comparatively few links and so chain reactions can also occur. This amplification can be achieved with photo-degradation.

The first advanced treatment for acne was benzoyl peroxide i.e. BPO applied topically. BPO was first utilized during the years the 1930s. It is still widely used today in concentrations typically ranging from 2.5% to 10%. It is very effective at killing the P acnes which is resident on the skin.

Its mechanism of action is thought to involve degrading the proteins level of bacteria by a free-radical mechanism. It may lead even to bacterial death. BPO is known for causing local skin irritation and can be painful to apply mainly on a daily basis. A current main area of research in dermatology-based pharmaceutical companies which are involving the development of novel formulations containing BPO. It also produces decreased irritation.

In addition to local skin irritation problem, BPO causes other side effects. Some of these include dry skin, contact allergy, and bleaching of skin and fabrics. Despite the many adverse effects, BPO has stood the test of time. It remains the gold standard for topical antibacterial treatment of acne.

Side Effects of BPO

One can reduce the chances of experiencing side effects by following the given directions on the product package or given by a dermatologist. If unwanted side effects occur then it can lower by the treatment in a lower strength.

Benzoyl peroxide is taking time to work and it is common. So, one may need to wait four weeks or even more before seeing a noticeable improvement in your skin.

In some rare cases, severe redness and peeling, extreme burning, itching, swelling and rashes may occur.

Q.1: What is the popular use of Benzoyl Peroxide?

Answer: This medication is useful to treat mild to moderate acne. It is useful in combination with other acne treatments. While application to the skin, benzoyl peroxide works by reducing the amount of acne-causing bacteria and by causing the skin to dry and peel.

Q.2: What is another antibacterial agent useful for the treatment of acne?

Answer: Propionibacteria acnes (P. acnes) are the bacteria responsible for acne breakouts. These cannot live in an aerobic i.e. oxygen-rich environment. So, BPO works by introducing oxygen into the affected pore and hence by killing P. acnes. When the population of bacteria is under control, then the number of breakouts on the skin will also be reduced. Such treatments are so effective because of its ability to help rid the follicle of excess dead skin cells.

So, clearing the pore of cellular debris will further lessen the chance of pore blockages. So, benzoyl peroxide is helping to prevent breakouts before they start. Even after clearing the acne, patients may probably still have to continue treatment. This is for avoiding the risk of acne to come back. Therefore, the vast majority of acne treatments are always advised for the long-term, but with the exception of isotretinoin.

Answer: The most common and adverse effect of benzoyl peroxide is its bleaching quality. This side effect is mainly causing the discolouration of coloured fabrics and bleaching of hair.

Q.5: What is the role of Salicylic acid for Benzoyl peroxide?

Share with friends
Previous
Antioxidants
Next
Band Theory Of Solids