Static friction is a force that hinders the movement of an object moving along the path. When two fabrics slide over each other, this friction occurs. There’s friction all around us. When we walk, for instance, our feet are in touch with the floor.

When we move, our feet’s backward motion exerts a pressure on the floor as the other foot progresses. Also, when we exercise this friction force on the floor, the floor on our feet exerts an equal and opposite strength. This is in line with one of the movement legislation.

If we want to avoid going on the steep floor, because of the presence of friction, we can do that. When we speak about friction, one thing to maintain in mind is that it will always behave in the reverse direction to that of relative motion, hence helping to slow down the velocity and eventually stop. 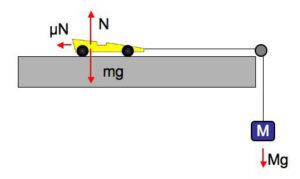 Friction between the various parts or movies of a liquid is regarded as fluid friction. Usually, this sort of friction occurs between the parts of a viscous fluid or between two distinct viscous fluids.

We understand that many devices use a sort of lubricant, generally oil, to decrease the wear and strain of the device components. The frictional force between this lubricant and any solid’s two surfaces is regarded as lubricated friction.

There is a frictional force between the liquid and the solid surface when a liquid moves across the body of any solid. We refer to this sort of friction as skin friction. Frequently, we also refer to it as drag.

Friction arises between the elements when there is a change in the configuration of a substance or solid from its previous configuration in this case. In other words, when the body is subjected to what is called deformation, it occurs.

Static friction is the frictional force between two substances ‘ surfaces when they are not in movement. Therefore, in this case, the bodies are stationary in relation to each other instead of the bodies being in relative motion.

But ultimately the kinetic frictional force enters into play as quickly as the body begins to move. The force with which the two bodies grips each other and we depict it by a numerical quantity which we recognize as the friction coefficient.

The force that helps an object to remain on another object’s ground instead of moving down is regarded as the normal force.

Ques: Which of these features has a soft surface?