Physics is a natural science that is based on experiments, measurements, and mathematical analysis. Its purpose is to find the quantitative physical laws for everything from the Nanoworld to the planets. A branch of science which is dealing with the interaction of matter and energy is popularly known as physics. There are two major branches of Physics. These are Classical Physics and Modern Physics.

Modern physics is that branch of physics that deals with the post-Newtonian concepts in the areas of physics. It is having its base on the two major breakthroughs of the twentieth century. These are Relativity and Quantum Mechanics. Modern physics mainly involves the advanced description of nature through some theories which were different from classical Physics. These are involving the elements of quantum mechanics and Einsteinian relativity. Albert Einstein is popular as the father of modern physics. 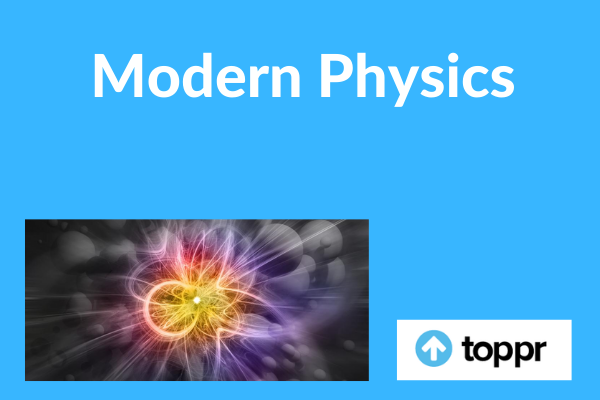 Modern physics is based on the two major inventions of the early 20th century. These are relativity and quantum mechanics. This kind of Physics is based on what was known before then, i.e. Newton’s laws, Maxwell’s equations, thermodynamics and termed as classical physics.

Modern physics is presenting the foundations and frontiers of today’s physics. It is focusing on the domains like quantum mechanics; applications in atomic, nuclear, particle, and also the condensed-matter physics. Mainly it includes the special relativity, relativistic quantum mechanics, Dirac equation and the Feynman diagrams, quantum fields with general relativity. The aim of modern physics is to cover these topics in sufficient depth.

Various topics which form the core to the foundation of modern physics are:

Several experiments have marked the history and development of Modern Physics. Among these, we may mention those who provided us with a deeper understanding of the structure of matter and atoms. Some such examples of these important discoveries are as given below:

Thus, modern physics was able to explore the nature of the microscopic world and the great relativistic speeds. It also provides valuable explanations for various physical phenomena that were, until then, misunderstood.

Q.1: Why is modern physics such important?

Answer: The term Physics describes how the natural world works with the applied mathematical formulas. Chemistry is essentially being applied to physics as well as biology is essentially applied chemistry. Physical theories are responsible for the changes in electronics giving advances in modern computers as well as electronic media.

Q.2: What is the most difficult in physics?

Answer: The most difficult concept in physics is undoubtedly the unification of the theory of gravity with the theories concerning matter and the other three fundamental forces. These forces are like electromagnetism and nuclear forces. At the later stage, it is constituting the Standard Model.