Static equilibrium refers to any system where the sum of the forces, and torque, on every particle of the system happens to be zero. Simply, it is the equilibrium of a system whose parts are at rest. Students can learn more about static equilibrium here.

Definition and Meaning of Static Equilibrium

Static equilibrium refers to the physical state in which a system’s components are at rest and the net force is zero through the system.

Static equilibrium takes place when all the forces acting on an object are balanced and the object is not in motion in relation to the relative plane. 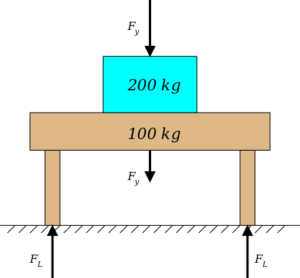 An object which is in static equilibrium is unable to move. This is because all the forces which act on it compensate for one another. This concept is quite important in the design of rigid structures.

A Balance of Forces

The fundamental and basic condition for static equilibrium is that an object must not be experiencing any type of motion, irrespective of translational or rotational.

The requirement with translational equilibrium is that the vector sum of all external forces is zero. Moreover, the directions and magnitude of external forces cancel each other out.

The requirement with rotational equilibrium is that all the external torques cancel each other out. Static equilibrium is certainly a valuable analysis tool.

Most noteworthy, when two forces act on an object in static equilibrium, they add up to zero.

Conditions and Equations for Static Equilibrium

According to Newton’s second law of motion, the linear acceleration of a rigid body takes place due to net force acting on it. Its representation is as follows:

Here, the sum of all the external forces acting on the object or body, “m” is its mass and a⃗ CM refers to the linear acceleration of its centre of mass. Furthermore, in equilibrium, the acceleration certainly happens to be zero.

Similarly to Equation (1), one can state that the rotational acceleration α⃗ of a rigid body about a fixed axis of rotation is due to the net torque acting on the body, or

Here I refer to the rotational inertia of the body in rotation about this axis and the summation is over all torques τ⃗ k of external forces in Equation (2). In equilibrium, the rotational acceleration is certainly zero.

The second equilibrium condition for the static equilibrium of a particular rigid body expresses rotational equilibrium:

Moreover, this equation for equilibrium is certainly valid for rotational dynamics about any axis of rotation.

Q1 Which of the following is not true with regards to static equilibrium?

A. It is the equilibrium of a system whose parts are in motion
B. It refers to any system in which the sum of the forces, and torque, on each particle of the system happens to be zero
C. It takes place when all the forces acting on an object are balanced and the object is not in motion in relation to the relative plane
D. An object which is in static equilibrium is unable to move