A pulley is a mechanical device which contains a wheel and rope/belt/chain to lift the heavy objects. The wheel of the pulley is generally fixed to a hinge and rotates on an axle or shaft. In a simple arrangement of the pulley, chain/rope/belt/cable is the driving element that drives over the wheel. At the one end of the rope, the object is loaded, and from the end, when the rope is pulled down the object lifts. To lift large objects an assembly of pulleys are used. These are also used to transfer power from one rotating shaft to another. The advantage of the use of pulleys is that by applying a little force heavy objects can be lifted. In other words, the pulleys multiply the force to lift the heavyweights which cannot be lifted with bare hands. 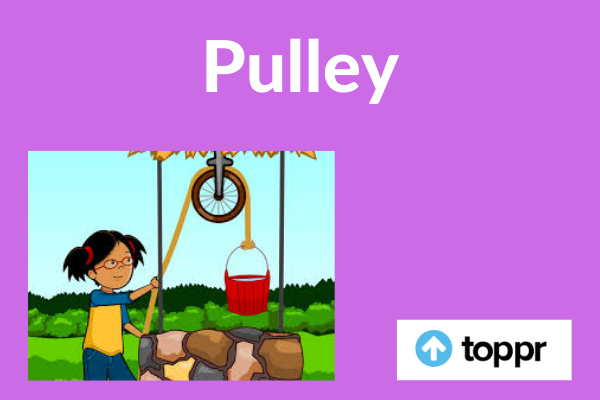 In the process of doing some work, a pulley is a simple machine that changes the direction and magnitude of the applied force. The rope and pulley system is also known as black and tackle system. There are three types of pulleys,

Fixed: A fixed pulley is mounted on an axle that has bearings at its centre. The wheel of the pulley is fixed on this axle in such a way that it rotates on its centre point. A rope is now surrounded by this wheel so that it can move circumferentially. Sometimes this wheel has grooves which help to rotate the rope around it easily.

Measurement of the Performance of Pulley

The mechanical advantage of the pulley system is directly proportional to the number of loops of the rope. In a single loop system, the efforts required to pull the weight is equal to the weight itself. By introducing another loop of rope (adding another wheel attached to the first wheel by additional rope) the effort requires to pull the same weight becomes half as compared to the previous arrangement.

The main advantage in the use of pulleys is that the effort becomes less as compared to the normal lifting of the weights. In other words, it reduces the amount of actual force required to lift heavy objects. It also changes the direction of the force applied. These two advantages in the use pulleys make them an important tool for heavy lifting. It also provides a mechanical advantage.

The other advantage in the use of pulleys is that the distance between the operator and weight. There is a safe distance between them which avoids any disaster. Pulleys are easy to assemble and cost-effective. The combination of different directional pulleys can change the position of the load with little effort. Though there are moving parts in the pulley system they require less or no lubrication after installation.

In some cases, the ropes/belts move over the wheel with no grooves, the chances of the slip of ropes/belts from the wheel are inevitable. If the system is installed to use for a long time, they require maintenance and regular check-up of ropes/cables as the friction between the wheels and cables/ropes occur causing wear and tear to them. Continuous use of the system makes the ropes weak. The rope may break while using the system causing damages to the operator, surrounding place and the load which is being lifted.

Answer: A mechanical device that reduces the efforts to lift the heavy objects or material with the help of rope and wheel is known as the pulley. In the general arrangement, a pulley is made up of rope or cable wrapped around a wheel which is hinged and fixed.

Q.2: What are the types of pulleys and how they are different from each other?

Fixed pulleys are those pulleys that are attached to a single point. As the name suggests that this pulley is stationary and is fixed to support like wall or ceiling and the rope/chain passes through it. These are vital mechanical devices as they change the direction of the object, which is very helpful.

Movable pulleys are different types of pulleys as they move with the object and unlike the fixed pulley; they need little effort to lift the heavy objects. They multiply the effort made on them. The drawback of using these pulleys is that they do not change the direction of the object.

Q.3: Define the mechanical advantage, its type, and how it is used for pulley?