Graphical Representation makes it simpler for us to understand data. When analyzing motion, graphs representing values of various parameters of motion make it simpler to solve problems. Let us understand the concept of motion and the other entities related to it using the graphical method.

We use line graphs to describe the motion of an object. This graph shows the dependency of a physical quantity speed or distance on another quantity, for example, time.

Why? Because as the definition goes, uniform motion is when an object covers the equal amount of distance at equal intervals of time. Hence the straight line. While the graph of a non-uniform motion is a curved graph. 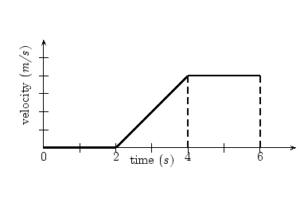 Question: The graph shows position as a function of time for an object moving along a straight line. During which time(s) is the object at rest?

Solution: Option B. Slope of the curve under the position-time graph gives the instantaneous velocity of the object. The slope of the curve is zero only in the time interval 1 < t < 2 s. Thus the object is at rest (or velocity is zero) only from 1 to 2 s. Hence option B is correct.