If we compare with displacement and speed, acceleration resembles the furious. It is a fire-breathing monster of movement factors. A few people are terrified of it and if it’s enormous, it compels you to pay heed. That feeling you get when you’re sitting in a plane during take-off, or hammering on the brakes in a vehicle.

Even turning over a corner at a rapid in a go-kart is generally circumstances where you feel the acceleration. Acceleration is the name we provide for any cycle where the speed changes. Since there are just two different ways for you to quicken i.e. either change your speed or alter your course or you change both. 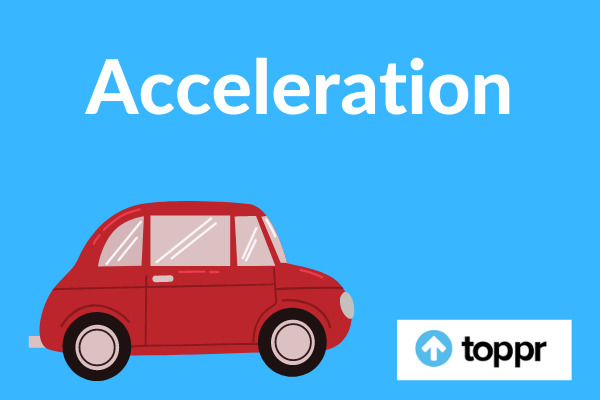 It is the joined impact of two causes i.e. the net equilibrium of all outside powers acting onto that object. Size is straightforwardly corresponding to this net coming about power and that item’s mass. Contingent upon the materials out of which it is made, the extent is contrarily relative to the item’s mass. The SI unit for increasing speed is meter every second squared \(\frac{m}{s^{2}}\).

For an instance, when a vehicle begins from a halt i.e. zero velocity, in an inertial edge of reference. If we travel in a straight line with increasing speeds consistently. This is accelerating or there is acceleration in the direction of travel. If the vehicle turns suddenly while moving, an acceleration occurs in the new direction in which we travel and it changes its vector of motion.

The response to which the passengers experience during motion is a centrifugal force. If the speed or velocity of the vehicle gradually decreases, this is an acceleration. But this acceleration is in the opposite direction of the motion. Mathematically, it is a negative acceleration, sometimes called deceleration.

The passengers that experience the reaction to deceleration as an inertial force that is pushing them in the forward direction. Such negative accelerations are often seen by retrorocket burning in spacecraft. Both acceleration and deceleration are treated similarly. Both changes in velocity.

The unit of Acceleration

Instantaneous acceleration, meanwhile, is the limit of the average acceleration over an infinitesimal interval of time. In the terms of calculus, quick increasing speed is the subordinate of the speed vector concerning time.

Uniform or constant acceleration is a type of motion. The velocity of an object changes by an equal amount in every equal time period. A case of uniform speeding up is that of an object in free fall in a uniform gravitational field.

Other forms of Acceleration

An object moving in a round movement, for example, a satellite circling the Earth. It is acceleration because of the alter of course of movement, despite the fact that its speed might be steady. For this situation, it is supposed to go through centripetal (coordinated towards the middle) speeding up. Legitimate acceleration, the speeding up of a body comparative with a free-fall condition, is estimated by an accelerometer. In traditional mechanics, for a body with steady mass, the speeding up of the body’s focal point of mass is relative to the net power vector. For example amount, everything being equal following up on it (Newton’s subsequent law).

where F is the net power following up on the body, m is the mass of the body. The focal point of-mass speeding up. As paces approach the speed of light, relativistic impacts become progressively huge.

Relation to the Relativity of Acceleration

The special theory of relativity portrays the conduct of items going comparative with different articles at speeds moving toward that of light in a vacuum. Newtonian mechanics is actually uncovered to be an estimate to the real world, legitimate to incredible exactness at lower speeds. As the important velocities speed up light, acceleration no longer follows traditional conditions. As paces approach that of light, the increasing speed delivered by a given power diminishes, getting imperceptibly little as light speed is drawn closer. An item with mass can move toward this speed asymptotically, however, never arrive at it.

Unless the condition of movement of an object is known, it is difficult to recognize whether a noticed power is because of gravity or to increasing speed. Gravity and inertial acceleration have indistinguishable impacts. Albert Einstein called this the identicalness rule, and said that” lone spectators who feel no force by any means including the power of gravity are defended in inferring that they are not acceleration.”

Q.1. What is the acceleration?

Answer. Acceleration is a vector quantity as it has both magnitude and direction. It is the second derivative of position with respect to time or it is the first derivative of velocity with respect to time. The SI unit for increasing speed is meter every second squared \(\frac{m}{s^{2}}\). Also “meter per second of the second”, as the speed in meters every second change by the acceleration esteem, each second.

Q.2. Can acceleration be negative?

The train arriving at the station eases back down. For this situation, we can say that the train is hindering. Hindrance is speeding up with a negative sign. Or on the other hand, the negative estimation of increasing speed shows that the speed of a body is diminishing.

Therefore, acceleration according to the question is zero.