We often wonder what is the reason behind all the stars and sun which makes them possible to exist. Well, one of the major reasons is that nuclear fusion makes it happen. It is basically a kind of reaction which released energy because of the presence of high-powered atomic bonds between particles present in a nucleus. So, nuclear fusion is when two or smaller atoms fuse together to create a larger heavier atom. Through this article, we will take a look at what it means and how there are so many applications of it. The definition, examples, and differences from nuclear fission will make it easier to understand this concept in detail. 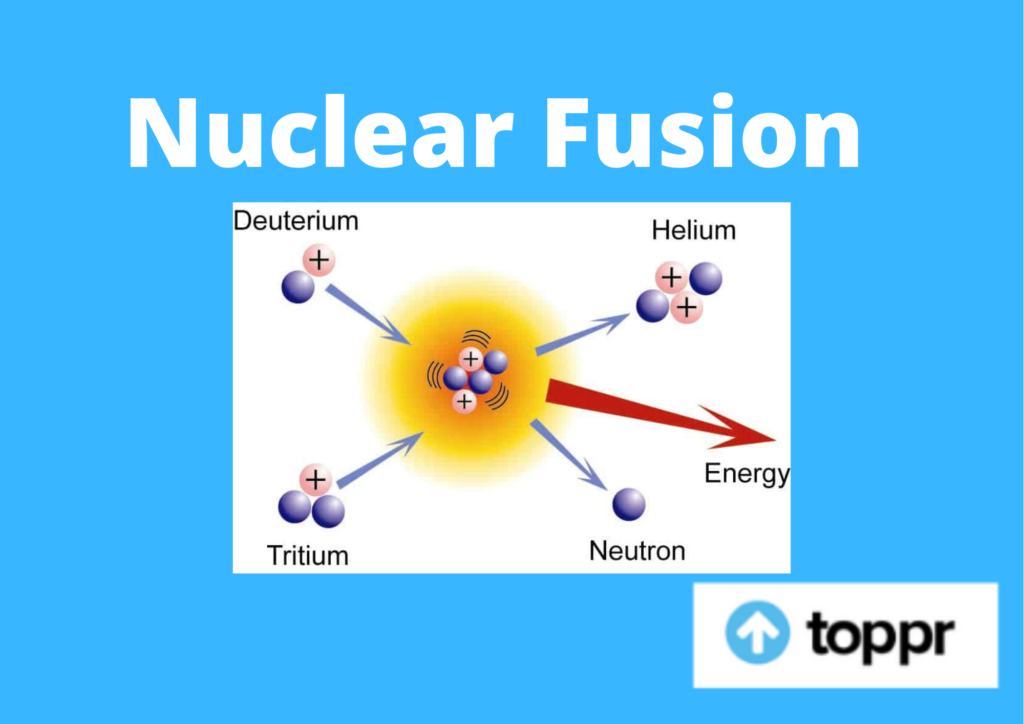 Nuclear fusion refers to a reaction through which two or more light nuclei collide into each other for forming a heavier nucleus. This reaction occurs with elements which have a low atomic number, like hydrogen. Further, it is the opposite of nuclear fission reaction as in there, heavy elements diffuse and create lighter elements. Moreover, both nuclear fusion and fission generate a substantial amount of energy.

Nuclear Fusion in the Universe

If you look at it closely, you will understand that every star in the universe, as well as the sun, is alive because of nuclear fusion. It is because of this process that they create such an astonishing amount of heat and energy. The pressure at the core of any star is immensely high and that is where the nuclear fusion reaction occurs.

The temperature at the sun’s core is approximately 15 million degrees Celsius. This temperature together with incredibly high pressure, two isotopes of Hydrogen, Deuterium, and Tritium combine for forming Helium and releases the enormous amount of energy in the form of heat. Approximately 600 million tons of hydrogen convert into Helium every second in the sun.

Basically, there are two major nuclear reactions which happen for releasing energy because of the presence of high-powered atomic bonds between particles present within a nucleus.

One is nuclear fission, where an atom splits into two or smaller, lighter atoms.  On the other hand, fusion happens when two or smaller atoms blend together and make a larger and heavier atom.

Further, fission does not occur naturally whereas the universe is filled with instances of fusion reactions. Similarly, every star makes use of it for producing energy. As you know, fission breaks heavy atom into two or smaller ones whereas fusion brings two or more small atoms together for creating one large atom.

Moreover, fission generates a great deal more energy than chemical reactions but not as much as fusion. Fusion generates plenty of energy when we compare it to fission reaction.

Finally, fusion needs a lot of heat and pressure for the process to occur whereas fission does not need a lot of energy for splitting an atom into two.

First of all, you should know that we are still at an experimental stage when we talk about nuclear fusion reactions.

Less nuclear waste- The fusion reactors will not create high-level nuclear wastes such as their fission counterparts. This results in disposal being less of a problem. Besides, the wastes are not going to be of weapons-grade nuclear materials which is the opposite in the case of fission reactors.

If we use it properly, nuclear fusion serves as the solution to the power crisis problem our world is facing right now. It is clean and creates a minimal amount of nuclear waste when we compare it to fission reactions.

The fuel for fusion, Deuterium, and Tritium, are also readily accessible in nature. So, the scientists are positive that in the approaching centuries, fusion will serve as a practical substitute power source.

To sum up, if a fission reaction gets out of control, it will either explode or the reactor which produces it will melt down into a large pile of radioactive slag. These types of explosions or meltdowns discharge tons of radioactive particles into the air and any bordering surface, land or water.

It contaminates the surface every minute as long as the reaction takes place. On the contrary, a fusion reaction that loses control and becomes unbalanced slows down and drops temperature until it stops.

Similarly, this is the same thing which happens to stars as they burn their hydrogen into helium and lose these elements over thousands of centuries of expulsion. Fusion generates little radioactive waste. If there any kind of damage occurs, it will happen to the immediate surroundings of the fusion reactor and hardly anywhere else.

It is safer to make use of fusion for producing power, however, we make use of fission as it takes less energy for splitting two atoms than it does for fusing two atoms. in addition, the technical challenges controlling fusion reactions involves have not been overcome yet.

Question 1: What is nuclear fusion and state the example.

Answer 1: Nuclear Fusion refers to a reaction which happens when two atoms join together for forming one or more different atomic nuclei and subatomic particles like protons and neutrons. A massive amount of energy releases in this process and is larger than the nuclear fission reaction. The example is fusion happens in the sun where the atoms of (isotopes of hydrogen, Hydrogen-3, and Hydrogen-2) Deuterium and Tritium merge in a huge pressure atmosphere with tremendously high temperatures. It is to create an output in the form of a neutron and an isotope of Helium.

Question 2: State the difference between nuclear fission and fusion.

Answer 2: Fission does not occur naturally whereas the universe is filled with instances of fusion reactions. Similarly, every star makes use of it for producing energy. As you know, fission breaks heavy atom into two or smaller ones. Whereas fusion brings two or more small atoms together for creating one large atom.