A betatron is a cyclic particle accelerator. A betatron is a transformer with a torus-shaped vacuum tube as its secondary coil. An alternating current given in the primary coils accelerates electrons in the vacuum. Basically, it uses the electric field induced by a varying magnetic field to accelerate electrons to high speed. The electrons accelerate around a circular path. The word betatron derives from the fact that high-energy electrons are often \(\beta\)-particles.

In 1935, the betatron was developed by Max Steenbeck in Germany. The betatron was the first machine that has the ability to produce electron beams at energies higher than the energy that could have been achieved in comparison with a simple electron gun. 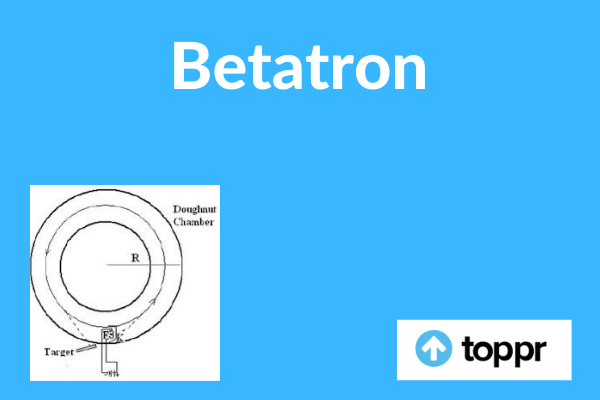 The changing magnetic field in a betatron from the primary coil accelerates electrons in the vacuum torus. This cause electrons to circle around the torus in the same manner as the current is induced in the secondary coil of a transformer alike Faraday’s Law.

\(\Theta _0\) is the flux within the area enclosed by the electron orbit,

Betatron oscillation is the oscillations of particles about their stable orbits in all circular accelerators. These are the stable oscillations about the equilibrium orbit are in the horizontal and vertical planes.

Hill’s Equation describes this type of traverse motion in Betatron as:

The maximum amount of energy that a betatron can impart is limited by the strength of the magnetic field. This is due to the saturation of iron and by practical size of the magnet core. The next generation of accelerators i.e., the synchrotrons, overcame these limitations of betatron and dominates.

Betatron is alike a transformer that acts as the secondary coil of the transformer. This accelerates the electrons in the vacuum tube as if it works under a constant electric field and variable magnetic field.

Question: What are the applications of Betatron?

Answer: Some applications of Betatron are as follows-

Betatron provides high-energy beams of electrons that is about 300 MeV. If the electron beam is directed at a metal plate, the betatron can be used as a source of energetic x-rays. The x-rays produced by betatron can be in use in industrial and medical applications. A small version of a betatron can provide a source of hard X-rays. It is through deceleration of the electron beam in a target for prompt initiation of some experimental nuclear weapons. It is done by means of photon-induced fission and photon-neutron reactions in the bomb core.

The Radiation Center is the first private medical centre to treat cancer patients with the help of betatron.