The famous Einstein’s theory of special relativity established the fact that mass is another form of energy. Also, you can convert the mass-energy into other forms of energy. This opened the doors to a better understanding of nuclear masses and the interaction of nuclei with each other. In this article, we will look at the binding energy of a nucleus which is essential to understand the nuclear fission and fusion processes.

According to Einstein’s mass-energy equivalence relation, we know that,

where c is the velocity of light in vacuum and is ≅ 3 x 108 m/s. Also, E is the energy equivalent of the mass, ‘m’. Experimental studies of nuclear reactions between nucleons, nuclei, electrons and other more recently discovered particles. According to the Law of Conservation of Energy, we know that in a reaction, the initial and final energy is the same provided we take the mass-energy into consideration.

In simple words, the mass of the 168O nucleus is less than the total mass of its constituents by 0.13691u. This difference in mass of a nucleus and its constituents is called the mass defect (ΔM) and is given by

So, what exactly does mass defect mean?

We can also say that if you want to break down an oxygen nucleus into 8 protons and 8 neutrons, then you must provide the extra energy (ΔMc2). The relation between this energy (Eb) to the mass defect (ΔM) is derived from Einstein’s mass-energy equivalence relation {equation (1)}. Therefore, 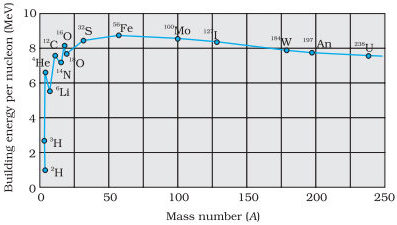 Here is what we can observe:

The force is attractive in nature and very strong producing a binding energy of around a few MeV per nucleon.

Next, imagine a very heavy nucleus having A = 240. This has a low binding energy. Therefore, if a nucleus A = 240 breaks down into two A = 120 nuclei, then the nucleons get bound more tightly. Right? Also, in the process energy is released. This concept is used in Nuclear Fission.

On the other hand, imagine two very light nuclei with A < 10. If these two nuclei were to join to form a heavier nucleus, then the binding energy per nucleon of the fused and heavier nucleus is more than the Ebn of the lighter nuclei. Right? So, the nucleons are more tightly bound post fusion. And, energy is released in the process. This is how the Sun works!

Solution: A nucleus of Nitrogen contains 7 protons and 7 neutrons. Therefore, the mass defect of this nucleus is,