Murphy’s Law is basically a very optimistic law which states that if anything can go wrong, it will. If it cannot go wrong, it will go wrong anyway. So, basically, this is the basic premise of the law. Through this law, we will go through what the meaning of this law is and its history. Moving on, we will also take a look at the different views on this law and some examples as well. 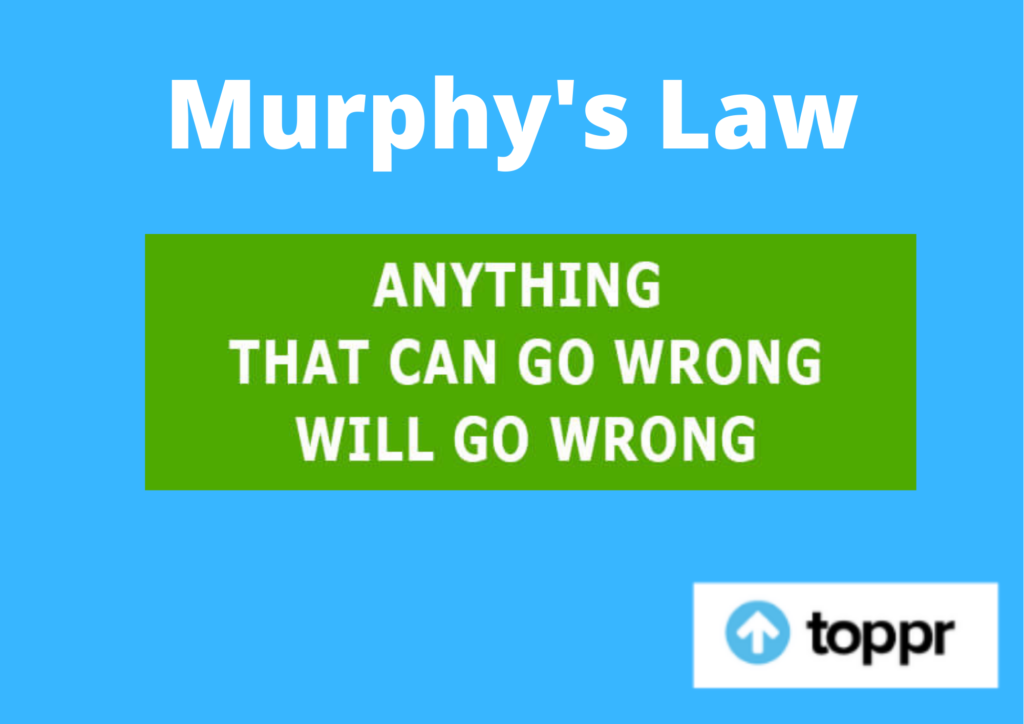 “Anything that can go wrong will go wrong”.

Allegedly, another correct and original reading of this law states that if there are two or more ways of doing something, and one of them can cause a catastrophe, then someone will do it.

However, the statement which best expresses the explosive nature of this law is certainly the idea that you will make the wrong choice, without a doubt, and whatever you decide, it may just be right.

So, this is not because some mysterious which this law possesses. In fact, we can give the law its importance based on our day to day life. When things go well, we do not really make anything of it.

In the end, we expect that things must out in our favour. However, when life is going bad, we look for reasons. So, you see that it is food for thought but there is hardly any evidence for supporting the law itself. It all comes down to perception and Murphy’s law captivates our imagination.

The alleged perversity of the universe has been a subject of comment for long, and forerunners to the modern version of Murphy’s law can be easily found. The members of the American Dialect Society have conducted significant research in this area.

Stephen Goranson, a member of this society, has found a version of the law, not yet generalized or bearing that name, in a report by Alfred Holt at a meeting of an engineering society in 1877.

It states that anything that can go wrong at sea usually does go wrong sooner or later, so it is not to be speculated that owners prefer the safe to the scientific. We can hardly lay any significant stress on the advantages of simplicity.

We cannot safely neglect the human factor in planning machinery. If you want to gain attention, the engine must be such that the engineer will be disposed to attend to it.

The contemporary form of Murphy’s law goes back as far as 1952, as an epigraph to a mountaineering book by John Sack, who described it as an “ancient mountaineering adage” saying that ‘anything that can possibly go wrong, does.’

As per the British ethologist and biologist, Richard Dawkins, these so-called laws like Murphy’s and Sod’s law do not make any sense. It is because they need inanimate objects to have desires o their own, if not to react as per one’s own desires.

He states that a particular class of events may take place all the time but we notice them only when they start to bother us. He gives an example of aircraft noise which interferes with filming.

We see aircraft in the sky all time but we only notice them when they cause a problem. This is a kind of confirmation bias where the investigator looks for evidence for confirming his ideas which are already formed but don’t look for evidence that contradicts them.

Likewise, a renowned professor and senior research investigator at Imperial College London, David Hand, noted that the law of truly large numbers must lead one to anticipate the type of events predicted by Murphy’s law to happen occasionally.

Thus, selection bias will guarantee that we remember those ones and the number of times Murphy’s law was not true are forgotten. There have been relentless references to Murphy’s law connecting it with the laws of thermodynamics from early on.

Specifically, Murphy’s law is frequently cited as a form of the second law of thermodynamics (the law of entropy) since both are foretelling a tendency to a more disorganised state.

Atanu Chatterjee examined this idea when he formally this law in mathematical terms. He found that Murphy’s law so stated could be invalidated when we use the principle of least action.

In today’s culture, there are numerous examples which have been accepted all over the world. For instance, if you apply butter on the bread and it slips from your hand, it will always land butter-side down.

Further, when you wash your car, it will definitely rain. Next, when you are standing in a queue, the other line will always move faster than yours. A lot of people will obviously interpret this law as a pessimistic take of life.

In reality, they couldn’t be further from the truth. Like, one who loses can take advantage of this law for helping prepare better for the unanticipated problems and challenges which we face in our life.

In other words, Murphy’s law assists us in analyzing and preparing for the future. It helps in project planning as well because we are able to evaluate the risk beforehand. Similarly, it also includes practical creativity by exploring the other way of thinking and to predict that something will go wrong. You can say, it basically prepares us with a Plan B.

Question 1: Why does Richard Dawkins consider this law nonsense?

Answer 1: The British ethologist and biologist, Richard Dawkins, says that these so-called laws like Murphy’s do not make any sense. It is because they need inanimate objects to have desires o their own, if not to react as per one’s own desires. He states that a particular class of events may take place all the time but we notice them only when they start to bother us.

Question 2: Give some examples of Murphy’s law?

Answer 2: Some examples of Murphy’s law are if you apply butter on the bread and it slips from your hand, it will always land butter-side down. Further, when you wash your car, it will definitely rain. Next, when you are standing in a queue, the other line will always move faster than yours.