As you know by now, rocks form naturally when the small grains of various minerals get compressed because of the pressure exerted on them and also the heat which they are exposed to. So, you see that there are different procedures for different kinds of rocks. There are three types of rocks, they are igneous, sedimentary and metamorphic rocks. In this article, we will look at the sedimentary rocks and learn about them in detail for a better understanding of these rocks. 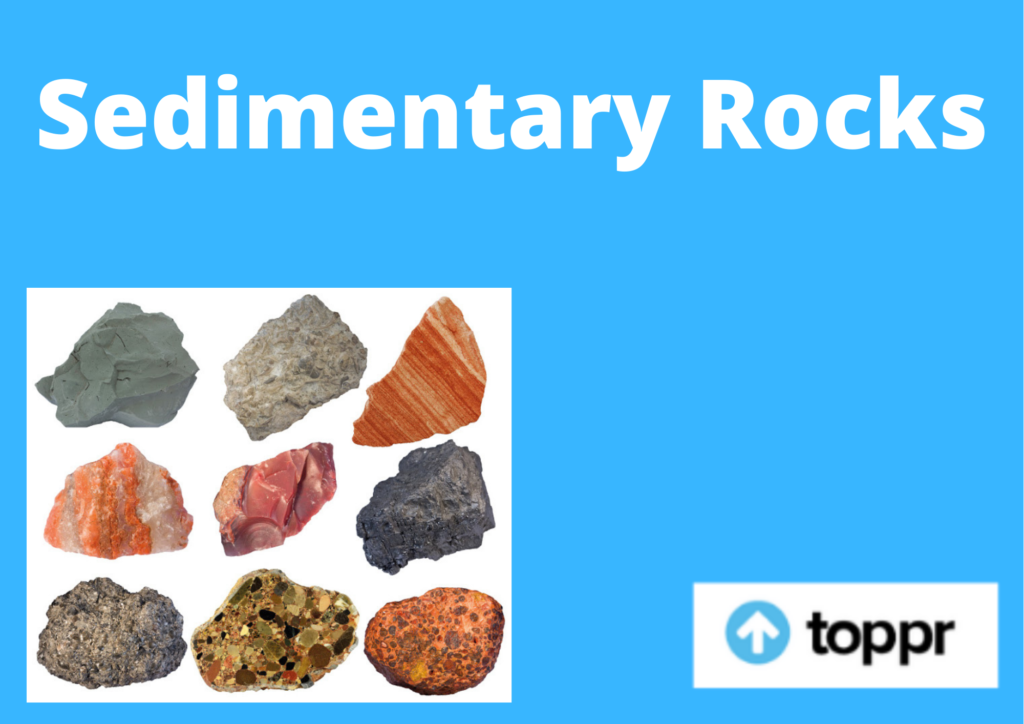 Sedimentary rocks form on or near the surface of the Earth. Thus, it is opposite to metamorphic and igneous rocks which form deep within the Earth. Further, the most significant geological procedures which result in the formation of these rocks are erosion, weathering, dissolution, precipitation, and lithification.

These rocks form through the deposition and subsequent cementation on the material at the surface of the Earth within the bodies of water. Moreover, there are four ways in which these rocks form.

The first one is the deposition of weathered remains of other rocks. Secondly, it is when the sediments accumulate and consolidate. After that, deposition of the results of biogenic activity take place. Finally, precipitation from solution occurs.

Sedimentation is basically the combined name for all the procedures which cause organic and mineral particles to settle. Thus, the particles which help in the formation of sedimentary rocks is known as sediment.

The sediments form due to erosion and weathering from the source area and which then transports to the deposition place by the wind, water, ice and glaciers. These are agents of denudation.

The best way for examining the rock type is to check the sediment grain size and variation. The texture of this refers to the features and arrangements of the grain in such sediments.

The structure exists in rock beds and under surfaces that help in recording the paleocurrent and has deposited in the rocks. It covers the continent of the crust of the earth, however, the total contribution of these rocks estimates to be around 8% of the total volume of the crust.

Some of the most common sedimentary rocks are limestone, chalk, clay, sandstone and shale. These rocks cover around 75% of the total surface of the earth.

We use sedimentary rocks in a lot of things. Most commonly, you see them in buildings and monuments. Some of the uses of this rock are that firstly, we use limestone for making cement. Further, we use limestone and sandstone for building stones.

Next, we use quartz for making glass. After that, we have rock gypsum which we use for making plaster. Most importantly, natural gas, oil,  coal, and uranium, and other energy resources are derived from sedimentary rocks.

Sedimentary rocks form by sediment which deposits over time. Flint is a hard, sedimentary form of the mineral quartz. Further, sedimentary rocks cover most of the rocky surface of the Earth. However, they only make up for quite a small percentage of the crust of the planet.

These rocks sometimes contain fossils of plants and animals which are around millions of years old. Next, limestone is often made from the fossilized remains of ocean life which died around a million years back. Finally, these rocks produce layers which we call strata and one can often see them in exposed cliffs.

Let us take a look at the properties of these rocks and learn about them better.

The colour of these rocks is frequently determined by iron, an element with two major oxides: iron(II) oxide and iron(III) oxide. Iron(II) oxide (FeO) only forms under low oxygen (anoxic) circumstances and gives it a grey or greenish colour.

In arid continental climates, these rocks are in direct contact with the atmosphere, and oxidation is an important process, which gives the rock a red or orange colour. The presence of organic material can make the rock turn into black or grey colour.

The texture of a rock may be a small-scale property but it does determine a lot of the large-scale properties of it. For instance, the density, porosity or permeability of the rock. Chemical sedimentary rocks have a non-clastic texture, comprising completely of crystals.

The texture of these stone is basically the sum of attributes like clay matrix, size and sorting of the detrital grains, the roundness of the particles. There is a scale of textural maturity which involves four textural stages through which we can evaluate the property of the rocks.

Most of these rocks comprise of either quartz or calcite. Sedimentary ones are opposite to igneous and metamorphic rocks, in the sense that they generally contain quite a few different major minerals. In other words, the origin of the minerals in these rocks is usually more complex than in an igneous rock.

The minerals in these rocks may form by precipitation during the process of sedimentation. In most of these rocks, mica, feldspar and less stable minerals have been reduced to clay minerals like kaolinite, illite or smectite.

Question 1: What is sedimentation?

Answer 1: Sedimentation is basically the combined name for all the procedures which cause organic and mineral particles to settle. Thus, the particles which help in the formation of sedimentary rocks is known as sediment.

Question 2: Give some examples of sedimentary rocks.

Answer 2: Some of the most common sedimentary rocks are limestone, chalk, clay, sandstone and shale. These rocks cover around 75% of the total surface of the earth.