An atom is present at the most basic level in everything we see around us. In fact, atoms compose every living organism. Matter makes up every non-living thing around us such as tables, chairs, water, etc. But the building blocks of matter are atoms. Thus, the composition of everything, living or non-living, is atoms. Let us study about atom and structure of atom.

Atom is a Greek word which means “indivisible.” The Greeks believed that matter can be broken down into very small invisible particles called atoms. Greek philosophers such as Democritus and John Dalton put forward the concept of the atom.

Democritus explained the nature of matter. He proposed that matter makes up all substances. Furthermore, he stated that atoms are constantly moving. They are invisible, minuscule particles that are different in shape, size, and temperature. And that we cannot destroy atoms.

Learn the concept of the Atomic number here in detail.

Later in the year 1808, John Dalton proposed the atomic theory. He explained the law of chemical combination. By the end of 18th and the early 20th centuries, many scientists developed and proposed several concepts on “atom.” Namely, J.J Thomson, Gold stein, Rutherford, and Bohr among others.

Atoms are further arranged and organized to form larger structures known as molecules. Atoms and molecules adhere to the general chemistry and physics rule even when they are part of living human body. Now let us study the structure of atom to further understand how the atoms react, behave and interact.

Learn more about Thomson’s Model of Atom in detail.

The structure of atom consists of two parts: 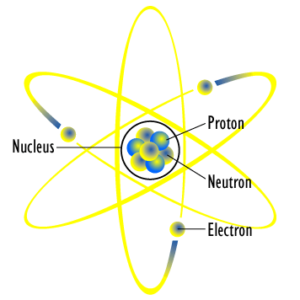 Learn how electrons are distributed in different shells in detail here.

Generally, all atoms except hydrogen consist of these three subatomic particles. Hydrogen is an exception to all atoms as it contains just one proton and one electron but lacks neutrons. The number of protons indicates what element an atom is.  Whereas the number of electrons indicates the type of reactions that will happen in an atom.

The atomic nucleus in the structure of atom consists of a fixed number of protons. Also, the proton attracts the same number of electrons thereby making an atom electrically neutral. The addition or removal of electrons from an atom results in the formation of ions.

Learn about the Disadvantages of Rutherford’s Atomic Model here.

Discovery of an Electron

In the year 1897, a British Physicist named J.J Thompson proposed that an atom constitutes of at least one negatively charged particle. He named it “corpuscles” which was later called “electron.”

Proton was discovered by Rutherford when he conducted the famous gold foil experiment. In 1886 Goldstein discovered the presence of positively charged rays while experimenting with the discharged tube using perforated cathode. The rays were named as anode rays or canal rays. A series of experiments led to the discovery of protons. Protons are the particles that contribute to the positive charge of the atom.

Gram is not an appropriate unit for the calculation of such tiny subatomic particles. But Dalton or amu (atomic mass unit) is appropriate. Furthermore, protons and neutrons have a mass that is nearly 1 amu.

Question: What is the net charge of an atom?

Share with friends
Previous
Reflection of Sound Waves
Next
Waves