We as a human beings are social animals. We need to interact and co-operate with other people for various purposes, such as requiring their help, their assistance in our day to day work and making them understand the intent and purpose of our actions. Now what we saw here is the need of other people in our day to day life but when you take the perspective of a whole nation, you need to understand the need of people on a macro level.

Without question, people of a nation are its greatest asset. It is their everyday skills and abilities that turn them into a resource for the nation. Healthy, educated and motivated people develop resources as per their requirement. These are Businesses, Organisations, Political party and NGOs.

To amplify the skills and significance of the people in the nation the union government in 1985 established Ministry of Human Resources Development (HRD). Like every other resource, human resources are not equally distributed in the world.

Population means how many individuals reside in an area, state, country, continent or the world. Now they main aspect of these individuals is that every individual differs either in age, sex, and the location of his/her residence. Now, the distribution of humans in the world is extremely uneven. The reason population changes over time is that of births, deaths and migration of the people.

Features such as topography of the region are one of the reasons for the area being highly populated or not. High mountainous areas, tropical deserts and areas of equatorial forests are sparsely populated. Areas which are North to the equator are more populated than the areas South of the equator because the climate and topography are warmer for humans to habitat and life to grow. Three-quarter of the world’s people live in Asia and Africa. Almost 60 percent of the world’s inhabitants live in just 10 countries.

The number of individuals living in per square kilometre land of the area is called as the Density of Population. The average density worldwide is 51 person per square kilometre. Among the areas of high concentration of people, Southcentral Asia ranks first followed by East and South East Asia.

Factors Affecting the Distribution of Population 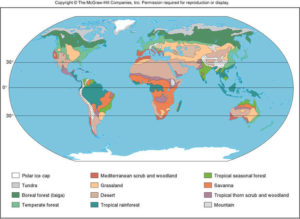 Population change is the change in the number of people during a specific time. As we discussed, this change occurs due to the births, deaths and migration of people. Until the 1800s, the population of the world grew at a slow pace as back then there was a very high rate of death rates. There were no proper health facilities and agriculture production was low and food availability was a major problem and hence the birth rate was very low.

In 1820, the world’s population reached 1 billion people. Within 150 years after that, it reached 3 billion in 1970. This is usually referred to as the population explosion. In 1999, the population was 6 billion which were double of what was in 1970. Death rates reduced and birth rates were very high during this period. Birth rates are the number of live births per 1,000 people. Death rates are the number of deaths per 1,000 people.

Migration means the displacement of people from one area to another. The difference between the birth rate and the death rate of a country is called the natural growth rate of the country.

The rate of population growth varies across the world. Even though the world’s population is rising, not all countries are experiencing this growth. 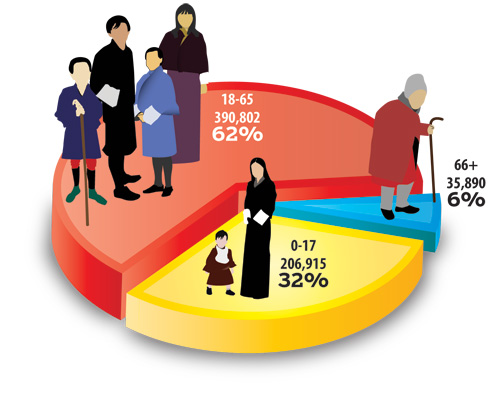 The population composition means the structure of population that includes the factors such as sex, health, literacy level, health condition, occupation and income level. It can also be explained in a pyramid known as an age-sex pyramid. With population divided into various groups such as 5-9years old and 10-14years old. It is divided into the male and female category. There are two groups of dependants:

Those between 15 and 65 are the working age and economically active. In Japan, low birth rates make the pyramid narrow at the base. Decreased death rates allow a number of people to reach old age.