The Beer Lambert law refers to a linear relationship between concentration and absorbance of an absorbing species. Moreover, it is the relationship between the properties of a particular substance and the attenuation of light through that particular substance. Beer Lambert law tells us that the absorption of a quantity of light by a substance that is dissolved in a fully transmitting solvent happens to be directly proportional to the substance’s concentration and the path length of the light via the solution.

The development of the law first took place by Pierre Bouguer before 1729. After its attribution to Johann Heinrich Lambert, the law included path length as a variable that had an effect on absorbance. Finally, an extension of the law took place by Beer in 1852 to include the concentration of solutions, and the law was named Beer-Lambert Law. 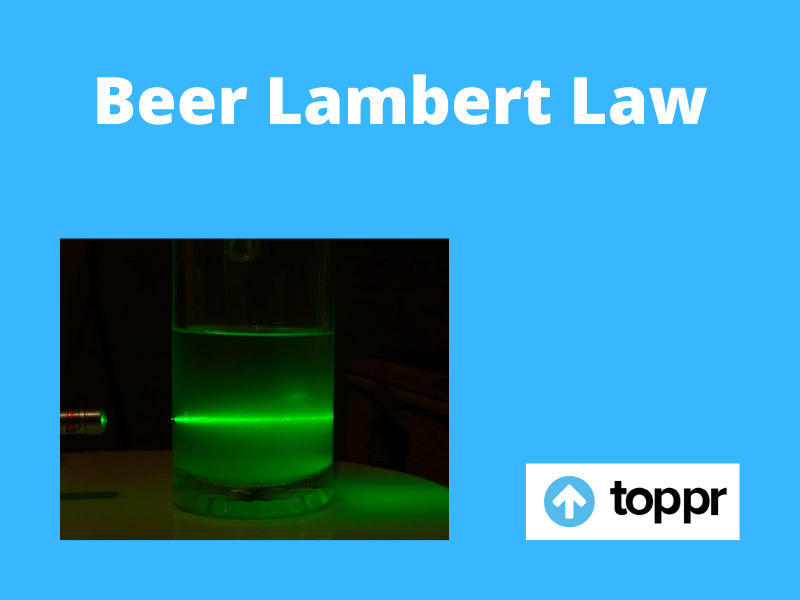 It is possible to measure the Beer Lambert law by calculating the concentration of a solution by making use of the absorbancies. Another way is to plot a graph of various concentrations and then align them according to their appropriate or correct absorbencies. Afterwards, one must use a colourimeter to calculate the concentration of an unknown solution.

A spectrophotometer refers to an apparatus that can undertake measurement of the intensity, energy carried or handled by the radiation per unit area per unit time, of the light that enters a sample solution and the light that goes out of a sample solution. Furthermore, the expression of the two intensities can take place as transmittance. Moreover, transmittance refers to the ratio of the exiting light’s intensity to the entering light or per cent transmittance (%T).

Different substances would not absorb the same wavelengths of light. Therefore, one of the characteristic properties of the material is the wavelength of maximum absorption by the substance.

The expression of the Beer-Lambert law can take place as:

ε is the molar extinction coefficient

L is the distance that the light through the solution covers

c is the absorbing species concentration

Following is an equation in order to solve for molar extinction coefficient:

But Beer-Lambert law simply happens to be a combination of two different laws: Beer’s law and Lambert law.

I is the intensity

I0 refers to the initial intensity

x is the depth in metres

𝜇 is simply the coefficient of absorption

Derivation of the Formula of Beer Lambert Law

Beer-Lambert law derivation can take place from an approximation for the absorption coefficient for a molecule. This happens by carrying out an approximation of the molecule by an opaque disk whose cross-sectional area is representative of the effective area seen by a frequency w photon.

Furthermore, the area would be approximately 0 in case the light’s frequency is far from resonance. Moreover, the area is maximum if the w is close to resonance.

dI is the intensity whose absorption takes place in the slab, and I is the intensity of light that exits or leaves the sample. Afterwards, the total slab’s opaque area because of the absorbers is * N * A * dz.

Integration of this equation can take place from z = 0 to z = b gives:

Answer 1: The application of the Beer-Lamberts law takes place to the analysis of a mixture by spectrophotometry. Furthermore, this application is without the need for extensive sample pre-processing. The Beer-Lambert law example includes the determination of bilirubin in blood plasma samples.

Question 2: What is meant by the deviations to the Beer Lambert Law?

Answer 2: The Beer Lambert law maintains linearity under some particular conditions only. Furthermore, inaccurate measurements will be made by the law at high concentrations. This is because the analyte’s molecules exhibit stronger electrostatics and intermolecular interactions. Moreover, this is due to the lesser amount of space that exists between molecules.