Interphase is the process of the cell cycle when a cell prepares itself to duplicate. Moreover, most of the life of a cell is spent in interphase. Students can learn more about the interphase and its various stages here. 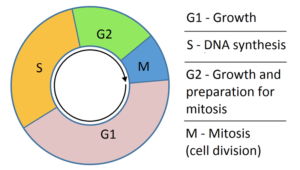 Interphase refers to the phase of the cell cycle in which a cell copies its DNA to prepare for mitosis. This phase is also referred to as the ‘daily living’ or the metabolic phase of the cell. Furthermore, in this stage, a cell gets nutrients and then metabolizes these nutrients.

After metabolizing the nutrients, the cell reads its DNA and performs other usual cell functions. This phase was earlier called as the resting phase. The change of that former name took place because in this stage the cell is preparing for cell division and not merely resting.

The G1 phase takes place right after the division of cells. A lot of protein synthesis occurs during G1. This facilitates the increase in the amount of cytosol in the cell. Cytosol refers to the liquid inside the cell. Furthermore, cell proteins are outside the organelles.

Proteins refer to the molecular machines that sustain the various activities of the cell. The increase in cell size occurs not merely for the production of new proteins, but also because of the more water which the cell takes in. Also, the protein concentration in a mammalian cell is roughly 100 milligrams per millilitre.

The synthesis stage is a very important stage because at this stage a cell copies its DNA. DNA replication is certainly a huge effort that requires a lot of proteins. Furthermore, the DNA does not exist by itself in a cell. Moreover, the DNA is packaged by proteins.

Blocking DNA synthesis with a chemical drug certainly means the blocking of histone synthesis. Therefore, the linking of the two processes takes place during the S phase.

During the G2 phase, the cell undertakes preparation to enter mitosis. The duplication of the DNA has already taken place during the S phase. Therefore the G2 phase is when the cell’s organelles need to duplicate.

The duplicated DNA would be divided evenly during cell division. Similarly, an even division of the organelles would also take place.

There are some organelles like mitochondria and chloroplasts which are discrete units and they do not bud off from larger organelles. Discrete organelles increase in number when their division takes place during G2.

Q1: Which of the following is not a stage of the Interphase?

A1: The correct option is C, which is the G3 Phase. This is because there is no such stage as the G3 phase. Furthermore, the other three options are certainly the stages or phases of the Interphase.