Scientists have been trying to classify living organisms in various ways for centuries. In fact, even Aristotle classified living organisms on the basis whether they lived on land, water or air. But biologists wanted a broader system of classifying living organisms. Hence came the five kingdom classification. Let us look at it in detail.

Very early on, scientists began grouping the living organisms under different categories. Some biologists classified organisms into plants and animals. Ernst Haeckel, Robert Whittaker, and Carl Woese are some biologists who attempted a broader system of classification. Amongst these, the Five Kingdom Classification proposed by Robert Whittaker stood out and is widely used.

Whitaker proposed that organisms should be broadly divided into kingdoms, based on certain characters like the structure of the cell, mode of nutrition, the source of nutrition, interrelationship, body organization, and reproduction. According to this system, there are five main kingdoms. They are:

Kingdoms are divided into subgroups at various levels. The following flowchart shows the hierarchy of classification.

Distinguishing Features of the Five Kingdoms

These organisms are prokaryotic and unicellular. They do not have a well-defined nucleus and also lack cell organelles.  Some organisms show the presence of cell wall while there are others without a cell wall. Consequently, some organisms are autotrophic and others are heterotrophic. Examples include Bacteria, Cyanobacteria, and Mycoplasma.

Organisms grouped under Kingdom Protista are all unicellular, but eukaryotic organisms. These are the simplest forms of eukaryotes that exhibit either autotrophic or heterotrophic mode of nutrition. Some organisms have appendages such as cilia or flagella or pseudopodia to move around. Some examples are Diatoms, Protozoans like Amoeba, Paramoecium 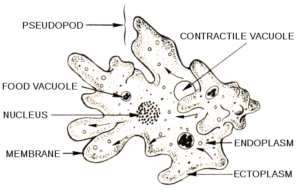 Heterotrophic, Multicellular and Eukaryotic organisms are grouped under Kingdom Fungi. Their mode of nutrition is saprophytic as they use decaying organic matter as food. They have cell walls, which are made up of a substance called Chitin. Fungi also form a symbiotic association with some blue-green algae. Yeast, Mushroom, Aspergillus are examples of Fungi.

These are Eukaryotic, Multicellular organisms with a cell wall that is made up of cellulose. They are autotrophs and synthesize their own food through the process of photosynthesis. This kingdom includes all plants.

Based on the body differentiation and presence or absence of specialized vascular tissue, Kingdom Plantae is divided into different divisions, namely Thallophyta, Bryophyta, Pteridophyta, Gymnosperms, and Angiosperms. Examples are Spirogyra, Ferns, Pines, and Mango Plant etc.

This Kingdom includes organisms that are Multicellular, Eukaryotic, without the presence of cell wall. They have a heterotrophic mode of nutrition. They also exhibit great diversity. Some organisms are simple while others have a complex body with specialized tissue differentiation and body organs.

The Animal Kingdom is divided into many phyla and classes. Some of the phyla are Porifera, Coelenterata, Arthropoda, Echinodermata, Chordata etc. Examples – Hydra, Starfish, Earthworms, Monkeys, Birds etc.

Q. Pick the correct statement from the following:

Ans. Protistans are Eukaryotic is the correct option. Fungi are microorganisms but are multicellular. Monerans are prokaryotes. And we all know that plants and animals are definitely multi-cellular.

Q1. Who proposed a five-kingdom classification and named kingdoms as Monera, Protista, Fungi, Plantae and Animalia?

Answer: R.H. Whittaker in 1969 introduced a Five Kingdom Classification. The kingdoms characterize by him were titled Monera, Protista, Fungi, Plantae, and Animalia.
The main principle for analysis used by him include complexity of cell structure (it may be eukaryotic or prokaryotic), complexity of organisms (unicellular or multicellular), thallus organisation, mode of nutrition (autotrophs or heterotrophs or acrophobic), reproduction (sexual or asexual) and phylogenetic relationships (prokaryotes to eukaryotes, unicellular to multicellular organism).

Q2. In Whittaker’s five kingdom classification, eukaryotes were assigned to
A. All five
B. Only Four
C. Only Three
D. Only One

Answer: The five-kingdom classification was proposed by R. H. Whittaker in the year 1969.
The kingdom Monera is comprised of unicellular prokaryotic organisms. The other four kingdoms, Protista, Fungi, Plantae, and Animalia are composed of all the eukaryotic organisms.

Thus, the correct answer is option B.

Q3. In the five-kingdom system of classification developed by R. H. Whittaker, members of the kingdom Animalia are heterotrophic, eukaryotic and
A. Multicellular
B. Motile
C. Unicellular or Multicellular
D. Both A and B

Answer: R. H. Whittaker proposed the five kingdom classification. The five kingdom classification are- Monera, Protista, Fungi, Plantae and Animalia. The organisms which are placed under the kingdom Animalia are heterotrophic and depend on the other organisms for food. These are eukaryotic organisms with well-developed organelles. These are multicellular organisms which are composed of many cells and can perform activities like locomotion.
Thus, the correct answer is option D.

Q4. Who proposed the five-kingdom system of classification and on what basis?

Answers: Five kingdoms of classification was proposed by RH Whittaker in 1969. He divided all living organisms into five kingdoms based on the following features: