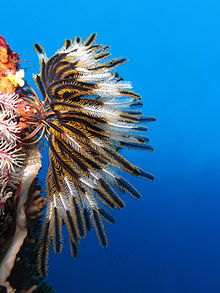 Echinodermata may look morphologically (structure and form) dissimilar at a glance, but they all share the same characteristic features. These animals have some really unique shapes and have beautiful colours. They are important ecologically and geologically, as they provide valuable clues about the geological environment.

Did you know that they can regenerate limbs? When a starfish, with five arms, losses one arm, it has the capacity to regenerate the lost arm. This regeneration can take any time between several months to years, as the wound has to heal and then only are the new cells regenerated.

Echinoderms are marine animals and can be found in the depths of the ocean as well as in the intertidal zone. An interesting feature of this phylum is that all animals belonging to Echinodermata are marine. There are no freshwater or terrestrial organisms in this phylum. Water vascular system present in the echinoderms is a unique circulatory system. This accounts for the gaseous exchange, circulation of nutrients, waste elimination as well as locomotion. This system has a central ring canal and radial canals that extend along each arm. Through these structures, water circulates. The madreporite is a structure present on top of the body. This is responsible for regulation of the water in the water vascular system.

Phylum Echinodermata is classified into the following classes: 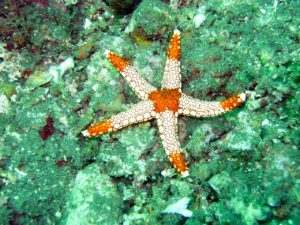 Ans. Echinoderms are exclusively marine animals. There is no freshwater echinoderm.

Q1. With reference to phylum Echinodermata, identify the classes which of the following have Pedicillariae?

Answer: A pedicellaria is a small claw-shaped appendage with movable jaws, called valves, commonly found on echinoderms (phylum Echinodermata), particularly in sea stars (class Asteroidea) and sea urchins (class Echinoidea). There are two major types of pedicellaria in sea stars: straight and crossed. Straight pedicellaria are typically larger and located on the body surface, whereas crossed pedicellaria are smaller and found more commonly on stalks, raised above the body surface or in clumps circling the spines. Four main forms of pedicellariae are found in sea urchins : tridactylous, ophicephalous, triphyllous and globiferous.

1. These are exclusively marine animals.
2. They are triploblastic and coelomate animals.
3. The larvae are bilaterally symmetrical while the adults are radially symmetrical.
4. They have organ system level of body organization.
5. They have spiny body and the endoskeleton is made of calcareous ossicles.
6. They possess water vascular system and tube-feet that help them to move and attach to the substratum.
Example- startfish, sea-urchin etc.

Q4. Give the characteristics of phylum Echinodermata.
a. They are spiny skinned organisms
b. They are diploblastic
c. They are unisexual
d. They do not have cavity