Oxidation of Aldehydes and Ketones

Aldehydes and ketone vary in their oxidation reactions but aldehydes can easily undergo this process to form carboxylic acids with known oxidizing agents such as potassium dichromate, potassium permanganate, and nitric acid, etc. Moreover, the oxidizing agents with a mild property such as Tollen’s reagents and Fehling’s reagent are also capable of oxidizing aldehydes.

This type of organic compounds can only oxidize under extreme or vigorous conditions. It requires strong oxidizing agents and high temperatures to carry out this process. Oxidation of ketones requires carbon-carbon bond cleavage so that the reaction can produce carboxylic acid containing a lesser number of bonds with respect to the parent ketone.

Learn more about Methods of Preparation of Carboxylic Acid here in detail. 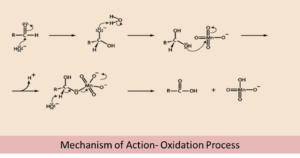 What happens when Aldehydes are Oxidized under an Acidic and Alkaline condition?

We have discussed previously it is easy to oxidize aldehydes in comparison to ketones. Therefore, oxidation of aldehydes is possible by either mild or strong oxidizing agents. However, ketone requires strong oxidizing reagents in order to undergo this process.

Learn more about the Preparation of Aldehydes and Ketones here in detail. It is a very common qualitative laboratory test help in differentiating between aldehydes and ketones. We know that aldehydes readily undergo oxidation whereas ketones are not. Tollen’s test also refers to as silver mirror test. Tollen’s reagent is a colourless, basic ammoniacal silver nitrate solution. It is a two-step procedure in which the resultant reagent is an aqueous solution containing silver ions in coordination with ammonia [Ag (NH3)2+].

When aldehyde undergoes oxidation with the fresh preparation of Tollen’s reagent resulting in the formation of the bright silver mirror. This occurs due to the formation of silver metal during the reaction. Finally, the aldehydes undergo oxidation to produce carboxylate anion. The reaction happens in an alkaline medium.

Procedure for Preparation of Tollen’s Reagent

The reagent will oxidize an aldehyde compound to its corresponding carboxylic acid. The reaction also reduces the silver ions present in the Tollen’s Reagent to metallic silver. Therefore, one should always use a clean glass tube to carry out this reaction to properly observe the mirror formation. However, ketones will not be able to oxidize Tollen’s reagent and hence it will not produce a silver mirror in the test tube. Hence, we can distinguish aldehydes and ketone with the help of this test.

The reaction requires heating of aldehyde with Fehling’s Reagent which will result in the formation of a reddish-brown colour precipitate. Hence, the reaction results in the formation of carboxylate anion. However, aromatic aldehydes do not react to Fehling’s Test. Moreover,  ketones do not undergo this reaction. Thus, we can differentiate between aldehydes and ketones.

There will always be at least one methyl group accompanying carbonyl carbon atom in case of aldehydes and ketones, hence the name methyl ketones. The compounds undergo oxidation with the help of sodium hypohalite thereby forming sodium salts of the respective carboxylic acids.

However, the product formed will always have one carbon atom less than the parent carbonyl compound. In the reaction, methyl group conversion to haloform occurs. The oxidation reaction does not cause any change in the double bond of the carbon-carbon atom.

Haloform reaction is one of the particular types of alpha halogenation reaction. The reaction occurs in the methyl ketone and converts the methyl group into a strong haloform leaving the group. The reaction can include chloroform, bromoform, and iodoform solid precipitate. This reaction helps to detect the presence of methyl ketone in the laboratories.

For instance, iodoform reaction and sodium hypoiodite reaction helps to detect the CH3CO group or CH3CH(OH) group that results in the formation of CH3CO group upon oxidation.

Question: What is the reason for the difference in behaviour of aldehydes and ketones?

Solution: The major difference between aldehyde and ketone is in the structure. Aldehyde contains an extra hydrogen atom in the carbon-oxygen double bond in comparison to a ketone. It lacks hydrogen atom.

The presence of the hydrogen atom in case of aldehydes makes it easy to oxidize. Hence, it acts as a strong reducing agent. However, ketones lack that particular hydrogen atom oxidation process becomes difficult. Hence, it will require very strong oxidizing agents to undergo the process. Moreover, oxidation of ketone happens in a very destructive manner and breaks the carbon-carbon bonds.  This is the reason aldehydes react with all sorts of oxidizing agents but ketones are very selective and require strong oxidizing agents.