In this article, we will look at the three types of radioactive decay namely, alpha, beta, and gamma decay. We will try to understand how these particles are emitted and its effects on the emitting nucleus.

Now, 42He contains two protons and two neutrons. Hence, after emission, the mass number of the emitting nucleus reduces by four and the atomic number reduces by two. Therefore, the transformation of AZX nucleus to A-4Z-2X nucleus is expressed as follows,

where AZX is the parent nucleus and A-4Z-2X is the daughter nucleus. It is important to note that the alpha decay of 23892U can occur without an external source of energy. This is because of the total mass of the decay products (23490Th and 42He) < the mass of the original 23892U

This energy is shared between the daughter nucleus, A-4Z-2X and the alpha particle, 42He in the form of kinetic energy. Also, alpha decay obeys the radioactive laws.

Beta decay is when a nucleus decays spontaneously by emitting an electron or a positron. This is also a spontaneous process, like the alpha decay, with a definite disintegration energy and half-life. And, it follows the radioactive laws. A Beta decay can be a beta minus or a beta plus decay. 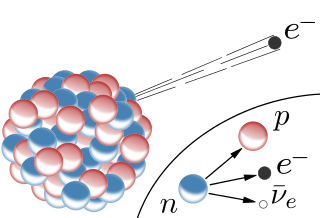 In a Beta minus (β−) decay, an electron is emitted by the nucleus. For example, 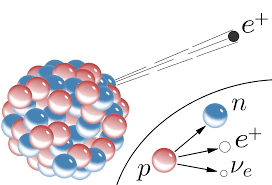 In a Beta plus decay, a positron is emitted by the nucleus. For example,

where v is a neutrino, a neutral particle with little or no mass. Also, T1/2 = 2.6 years. The neutrinos and antineutrinos are emitted from the nucleus along with the positron or electron during the beta decay process. Neutrinos interact very weakly with matter. Hence, they were undetected for a very long time.

Further, in a Beta minus decay, a neutron transforms into a proton within the nucleus:

Also, in a Beta plus decay, a proton transforms into a neutron (inside the nucleus):

Hence, we can see that the mass number (A) of the emitting nuclide does not change. As shown in equations (6) and (7), either a proton transforms into a neutron or vice versa. After an alpha or beta emission, most radionuclides leave the daughter nucleus in an excited state. This daughter nucleus reaches the ground state by emitting one or multiple gamma rays. For example,

6027Co undergoes a beta decay and transforms into 6028Ni. The daughter nucleus (6028Ni) is in its excited state. This excited nucleus reaches the ground state by the emission of two gamma rays having energies of 1.17 MeV and 1.33 MeV. The energy level diagram shown below depicts this process. 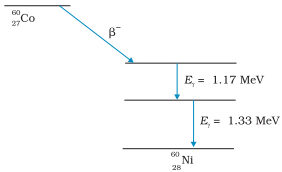 Question: Find the Q value and kinetic energy of the emitted alpha particle in: