It is probably the most loathed about insect ever present. But the fact remains that cockroaches have inhabited the earth for the past 300 million years and continue to be present on earth. Read along to know more about the external morphology and internal anatomy of a cockroach which belongs to the phylum Arthropoda. The common cockroach is scientifically known by the name Periplaneta americana.

As an arthropod, the body of a cockroach is divisible into three distinct regions. They are the head, thorax, and abdomen. There is a hard exoskeleton that is brown n color, made of chitin. The hardened plates of the exoskeleton are called the sclerites. A cockroach is a dioecious animal, with separate male and female sexes. The male species are longer in length while the females are slightly smaller than the males. 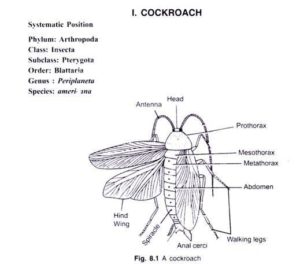 The head of the cockroach has a distinct triangular shape. It is formed by the fusion of six segments. The head shows great mobility due to the presence of a flexible neck. A pair of compound eyes is present on the head. In front of the eyes, membranous sockets are present, out of which two antennae protrude out.

The antennae monitor the surrounding environment with the help of the sensory receptors. The head also has appendages that bear similarity to the mouthparts, such as labrum, a pair of mandibles, a pair of maxillae and a labium. There is also flexible lobe called the hypopharynx that acts as a tongue.

The thorax is further divided into prothorax, mesothorax, and metathorax. Each segment of the thorax has a pair of walking legs. The first pair of wings called the tegmina comes out from the mesothorax and the second pair comes out from the metathorax. The tegmina are dark and cover the hind wings, which are membranous, transparent and used in flight.

Learn more about Morphology and Anatomy of Frog here.

The gizzard is the next structure that is present after the crop. It is also called the proventriculus. It helps in grinding the food particles due to the presence of six chitinous plates called teeth. A cuticle lines the entire foregut. At the junction of the foregut and midgut, there is a ring of tubules called the gastric caecae, which secrete digestive juice.

Another ring of 100-150 yellow coloured thin filamentous Malpighian tubules is present at the junction of the midgut and hindgut.  These Malpighian tubules help in the removal of excretory products.   The hindgut opens outside through the anus. 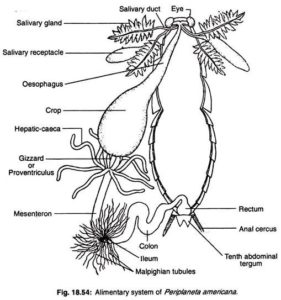 An open blood vascular system is found in a cockroach as the blood vessels are poorly developed. There is an open space called the hemocoel into which the visceral organs are located. 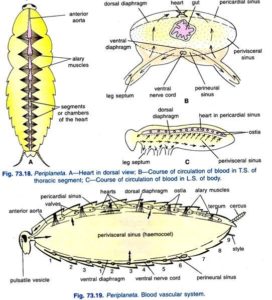 In cockroach, the respiratory system has a network of the trachea. They open through 10 pairs of spiracles that are present on the lateral side of the body. Thin tubes carry oxygen from the air to all the parts of the body. The spiracles are regulated by the sphincters. Exchange of gases takes place by diffusion.

The Malpighian tubules perform the excretion in a cockroach. There are glandular and ciliated cells that are present lining each tubule, which absorb the nitrogenous waste products. These are converted into uric acid and excreted out through the hindgut. This is the reason why a cockroach is called a uricotelic.

The female reproductive system has two large ovaries that are present laterally in the 2nd to the 6th abdominal segments. A group of eight ovarian tubules forms one ovary. They contain a chain of developing ova. The fertilized eggs are encased in a casing called the oothecae. Female cockroaches produce around 9 to 10 oothecae which contain around 14 to 16 eggs each.

Q: Antennae of cockroach have

Ans: The correct option is “D”. The cockroach antennae have a sensory appendage that generates the olfactory, gustatory, tactile, thermal and humidity senses. Of the variety of senses, the tactile sense is thought to play a key role in perceiving physical objects.

Answers: Cockroaches are insects of the order Blattodea, sometimes called as Blattaria, of which about 30 species out of 4,600 total are associated with human habitats. They have six legs. About four species are well known as pests. Cockroaches live in a wide range of environments around the world. Pest species adapt readily to a variety of environments, but prefer warm conditions found within buildings. Many tropical species prefer even warmer environments.
Cockroaches are mainly nocturnal and will run away when exposed to light.

Q2. Define structure of a cockroach?

Answers: Cockroaches have a long pair of antennae that help them to pick up smells and vibrations. The antennae are connected to the head, which also includes the brain, strong mouthparts for scraping and chewing food and compound eyes. They have poor vision and dislike light.
After the head comes the thorax. It includes three pairs of legs – cockroaches have six legs total – and two pairs of wings. There is a plate behind the head called the pronotum. Adult cockroaches have wings.
The abdomen consists of reproductive organs. At the back of the abdomen are two short protrusions called cerci. They function like rear antennae and are connected to the roach’s legs by the abdominal nerve ganglia. This allows their legs to start moving when vibrations are sensed, often before their brain even processes a threat.

Answer: The cockroach is an insect belonging to the phylum Arthropoda. They are assumed to have been present even over 320 million years ago, in the Carboniferous period. They are unisexual animals, having male and female sexual organs present on different organisms. One cockroach either has male sex organs or female sex organs.
So, the correct answer is ‘False’.

Share with friends
Previous
Nomenclature of Organic Compounds
Next
Frogs